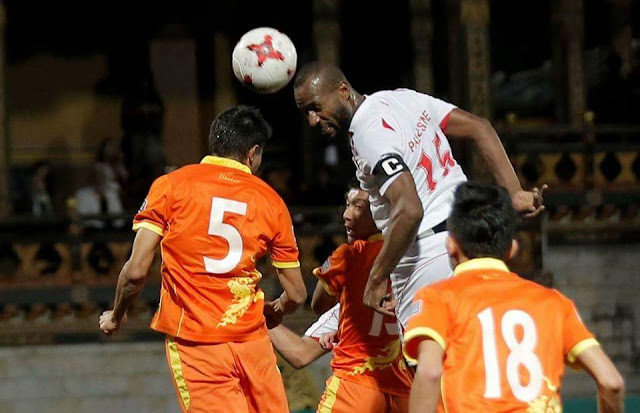 
Recap: Palestine huffed and puffed to earn this result. After an opening stanza culminated in plenty of pressure but no goal, Bhutan were emboldened and although Rami Hamadi's goal was never truly threatened there was no shortage of nervy moments.

Bhutan won the first three corners of this game by leaning heavily on their defence and countering with speed. What has started to become obvious is that Abdelatif Bahdari is slower than he used to be and that lack of agility was put to the test tonight.

For their part, Palestine did regroup at the half and the first ten minutes were a testament to their patience. Mohammed Darwish- perhaps the best player on the night- sent a switching ball to Yashir Pinto Islame who netted his fifth goal in just eight games.

Palestine can count themselves lucky that Bhutan didn't punish them in the final stanza of the game. There were plenty of set pieces that could have spelled doom. Abdelatif Bahdari was caught dawdling on the ball and his recovery run and tackle could have easily (given the standards of Asian refereeing) been whistled as a penalty.

Some gloss was put on a rather poor performance in the final minute with Bahdari notching the fourth goal of his national team career (and his third under Barakat) with a lovely bicycle kick.

The points mean Palestine are one step closer to their goal of Asian Cup qualification but a gritty win against one of Asia's weakest should send alarm bells ringing.

What I liked: The three points. Let's not get too caught up in aesthetics. Everyone (myself included) was guilty of marketing this match as a festival of goals. Observers willfully ignored Palestine's record in these types of games (think 0-0 vs. Nepal on the road to Australia 2015) and sold Bhutan a little short based on the disastrous 14-0 loss suffered in Muscat.

Let us also not forget that France drew 0-0 to Luxembourg hours ago with a World Cup berth on the line. France suffered that result without having to battle on a dodgy pitch 2000 meters above Sea Level.

Qualifying is about results as long as the coaching staff learns from this then Palestine should be alright going forward.

What I didn't like: Playing two defensive midfielders was not necessary but it was more than just the formation. I didn't understand what some players were doing in the context of the formation. There was a chance early on in the game when Jaka Ihbeisheh was wide open on the edge of box and Maraba decided to launch a speculative effort from outside the box.

Missing a chance is forgivable but foregoing team play to show off cannot be tolerated. Jaka Ihbeisheh may have missed a chance to open the scoring but at the very least he played within himself and the formation. Are we really surprised that things went pear shaped when he was withdrawn? Ahmad Maher came on and made some really nice central runs that were ignored.

At least Maraba and Seyam merit selection based on their WBPL form- what has Khaled Salem done to be in this squad? Matías Jadue was available on the bench. Ahmad Abu Nahyeh and Mahmoud Eid were left at home but Khaled Salem was called up.

Man of the Match: Mohammed Darwish. Broke up play and drove play forward- has brought his aggression under control and it's a sight to behold. Beautiful assist on the winning goal and also put the ball back into the mixer on the second.

Asian Roundup: Palestine and India remain the two only unbeaten sides in the third round of Asian Cup qualifying. India downed Macau 2-0 after being held scoreless by their hosts. The subcontinental side has yet to concede in 2019 Asian Cup qualifying. Lebanon took a huge step towards qualification by nicking a point in Pyongyang- moving five points clear of their closest challenger.

In the other Group D match, Oman bounced back to record a 5-0 win over Maldives- they are this stage's top scorers with 20 goals through three games.

West Asian sides continued to dominate with Bahrain recording a 5-0 win over Chinese Taipei and Jordan seeing off Afghanistan 4-1. Yemen's credible 2-2 away draw in Bacolod still has them on pace to complete a West Asian sweep, they currently lie in second place two points ahead of Tajikistan who picked up their first points with a win over Nepal.

What's Next: Palestine travel to India for a friendly on October 2nd looking to keep their 100% record in 2017 going against India who are undefeated in 11 games. They then host Bhutan knowing that a win would officially clinch a berth at the 2019 AFC Asian Cup. Palestine can also qualify with a draw and Maldives loss.