October 04, 2017
With Palestine set to take on Bhutan in just under one week's time, injuries have forced the coaching staff to make several changes to the 23-man squad. Palestine can seal Asian Cup qualification with a win or a draw coupled with Oman's defeat of Maldives later in the day.

Most notably, Abdel Nasser Barakat will be without centre back Tamer Salah, forwards Yashir Pinto Islame, and Ahmed Awad due to injury.

Östersunds FK's winger Hosam Aiesh, who appeared three times for Sweden's U19 team, has completed his switch of nationality paperwork. His debut with Palestine will have to wait at least another month as an injury has ruled him out of his club's last two games.

Jaka Ihbeisheh was originally called up to the side but was given special dispensation to remain with his club. Police Bero and Ihbeisheh will instead turn their attention to the League Cup quarterfinal on October 11th.

In goal, Toufic Ali returns to the side as a backup to current number one Rami Hamadi.

Yazan Iwaiwi earns his first call up in nearly a year and will provide cover at the centre back position.

Jonathan Cantillana- who missed the last game against Bhutan- has also been called up.

Olympic team striker Mahmoud Yousef has been drafted to cover for the absences up front. The coaching staff tried to call up Ahli Amman's Gazan duo Mahmoud Wadi and Mohammed Balah but were prevented from doing so by Israel's occupying forces.

Ahmad Abu Nahyeh- who has not been in the best of form with new club Hilal Al-Quds- also misses out but the staff recalled Oday Dabbagh who could become just the fourth 18 year old to play for the senior team if he plays in this match. 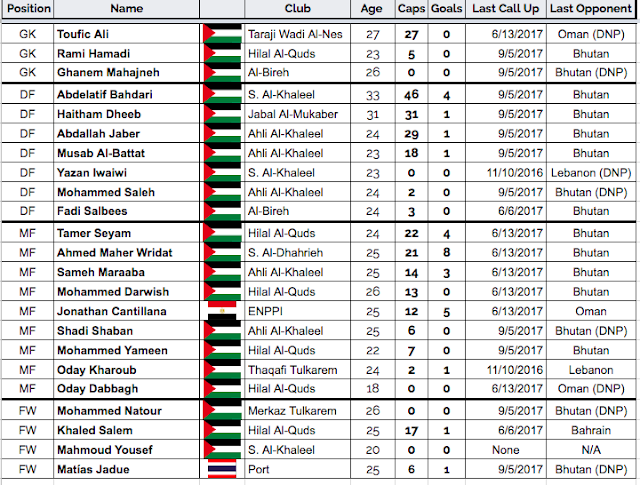