Pinto: I want to play in the World Cup with Palestine

November 28, 2017
The original, Spanish version, of this interview ran in El Mercurio on November 20th. 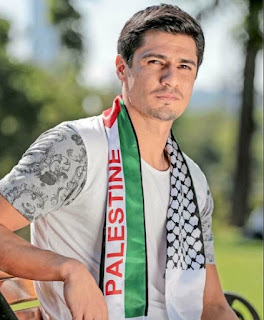 He was a product of Colo Colo- Who came into contact with the national team of his ancestors by way of LinkedIn and achieved an historic Asian Cup qualification. Here he speaks of the Arab-Israeli conflict while dispensing football anecdotes.

“Bielsa told me that I could become the next #9 of the national team” he states.

Yashir Armando Pinto Islame debuted at 17 with Colo Colo and after participating in two title winning seasons with Los Albos he commenced on a journey around the world to find his place. Four clubs in Chile, Canada, Hungary, a stint in the German fourth division culminated with his arrival in Malaysia where he is one of the mainstays of Perak FA.

“During the initial phase of my career, my development was rushed because I was sent out on loan at 18 years of age. I didn’t undergo a process of maturation as a player while I was with Colo Colo.


The press can sometimes make one out be more than he actually is. A feeling that is great and better than any other. In 2011, after the Sudamericano U20 Championship, I was on trial at Freiburg in the Bundesliga and they offered $500,000 for my transfer. It didn’t happen because Colo Colo asked for $3 million.”

Pinto didn’t “burst onto the scene” as many had hoped. He knows that, but at the same time he knows what he’s looking for now at 26 years of age. “My mistake was wanting to be what other wanted me to be. Now I want to be happy playing. When I decided that, my career changed for the better. I looked for clubs online, my girlfriend sent my information and we sent on my videos. I was my own PR machine!”

Palestine in the soul

In that way, his dreams came to light with the Palestinian national team. He came into contact with them over LinkedIn and thanks to his maternal great grandfather, Ismael Yunis Islame, who was born in the Holy Land. With Palestine, he has played eight games and scored five goals, en route to qualifying for the Asian Cup Finals in 2019.

Q: How was your first trip to Palestine?

It was arduous. I arrived to Tel Aviv and at passport control I was taken for further questioning. One of the policemen had a machine gun in his hand but they were friendly.

‘Why have you come to Israel’ they asked. 'No I have come to Palestine’ I said. And that changed everything. The machine gun was moved into position, pointed at me. They pushed me and then asked me to wait. Their looks and postures were defensive. They asked me everything about my family, even my Facebook. After five hours I could take a taxi to go from Tel Aviv to Ramallah. This road is remarkable. It is like going from Miami to Haiti with burned out cars and houses in the ground once you enter the West Bank.

I questioned everything. How could this be? If this was any other country in the world things would be very different. I asked myself how the Jews who lived through Hitler and Nazism, and were tremendously oppressed, how could they do the same thing to another people, another religion, race or culture?”

Q: What’s it like over there for a national team footballer?

In Ramallah, I can live a normal life. I can go to the city center to buy things, I can go out of the hotel without fear. Over there they have cars but they can only go around in Ramallah. There is nothing of America[n brands] but the people are very much into football.

The reality is though that the Israelis have the right to get any house they want or to register what they wish. In Ramallah, it is a little better because there are agreements, but in the rest of the country they do as they please.

Q: Do you think that a solution to the conflict an be achieved?

Politically, I do not believe that there could be a solution. It’s a situation of those with pistols fighting against those with just a stick and a stone.

Q: Do radical movements, such as Hamas, do more harm than good?

I don’t anything about the Gaza Strip, where they are currently in power [ed note: Hamas has since entered a power sharing agreement] but I have a friend who went there and he hold me that it is super complicated in every sense of the word. I would like to to go to Gaza, because I want, through 90 minutes of football, that everyone in the country forget about the hardships they live through. The Palestinians are a people who have suffered too much. There are other national team players who have double nationality we are also Chilean, Swedish or Slovenian but it means a lot for us to go. We are always thanked and we receive lots of well wishes from the fans.”

Miguel Riffo, Bielsa, and the “Matador”

“In my first call up with Colo Colo I arrived in my school uniform with my school shoes. Miguel Riffo saw me and gifted me some slippers and football boots that were very in bad then. I was flying and couldn’t stop shaking. I didn’t have money for that,” recalls Pinto, a native of Puente Alto, of his starts with the team from Monumental.

In 2010, Yashir traveled to the World Cup in South Africa as an alternate player. A month earlier, in a friendly against Mexico, he was on the bench after an injury to Esteban Paredes.

“I was able to pivot between positions quite well and that what Bielsa liked. Five days before the game, Bielsa told me ‘If you get in you will play as a 9 or a 10 and I want you to make these movements.’ He detailed everything and showed me videos. It was incredible. ‘If you do this, you can be the next #9 for the national team. If you don’t do this, I won’t call you up again’.

“In the Azteca, I was sent to warm up to substitute in order to replace Matías Fernández, but they rightly sent off Iturra and I didn’t play. The thing is, if I came on I might not have been able to represent Palestine”

With the Chilean national team, he got to know his childhood idol, Marcelo Salas. “In the 2009 Classico, when we won with the goals of Lucas Barrios, I looked at bench of Colo Colo to the Matador and it was extraordinary. Obviously, I could not greet him or ask to take a photo with him because Marcelo played for La Universidad. Later on in the national training complex I trained with him. He is the best player I have seen without a doubt. He never failed."
“My dream is to play in the World Cup with Palestine. I want to reach peak form during the Asian Cup, because we represent the Palestinian people. We play and know that there are so many people behind us. To qualify for the Cup is to say ‘Here we are, we didn’t disappear.’ I try to help in that” he explains.