In an apparent bow to ongoing criticism, Palestine Football Association President Jibril Rajoub has announced that Abdel Nasser Barakat will been appointed technical director of the PFA.

Barakat, who was manager of the national team since April 2015 until his abrupt dismissal last month will now be in charge of overseeing coaching and player development in Palestine.

He takes over the role from Ahmad El-Hassan, who posted this on his Facebook page following the announcement:


"For every beginning there is an end. After a five year journey as the PFA's technical director and countless successes in developing coaches and players at all levels all that is left to do is to thank President General Jibril Rajoub for all his support, the technical division, and the world class brethren of the PFA and the Joseph S. Blatter Academy. I wish you continued success in the future." 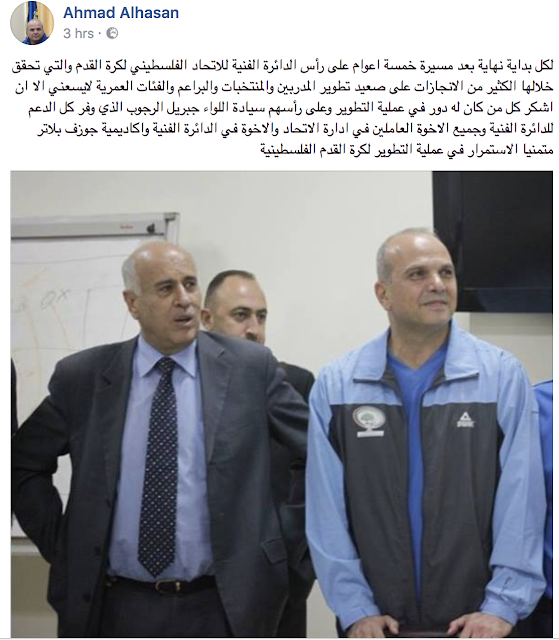 Ahmad El-Hassan has found himself the odd man out in a game of musical chairs. Jibril Rajoub's decision to take an offer from the Saudi General Sports Association left a wildly successful manager out of a job. With fans and the media up in arms over the decision, Rajoub was forced to try and correct his mistake.

With a deal already formally agreed, he could not renege nor would he have wanted to having pocketed $1 Million USD and the free services of a manager.

The axe instead fell on Ahmad El-Hassan, a man who is deeply unpopular having been the manager during the 2015 AFC Asian Cup following the resignation of Jamal Mahmoud.

Following the announcement, Rajoub rambled incoherently about the media needing to be up to "international and Asian standards"

The appointment of Abdel Nasser Barakat as technical director provides the PFA with an insurance policy. Firstly, he can now help the incoming staff in selecting players. Moreover, keeping Barakat on the books of the PFA means he can seamlessly transition back into the role in February 2019 when Julio Cesar Baldivieso's contract runs out.

Barakat had been linked with various posts over the past month including managerial vacancies with Kosovo, New Zealand, Maldives, and Hong Kong.