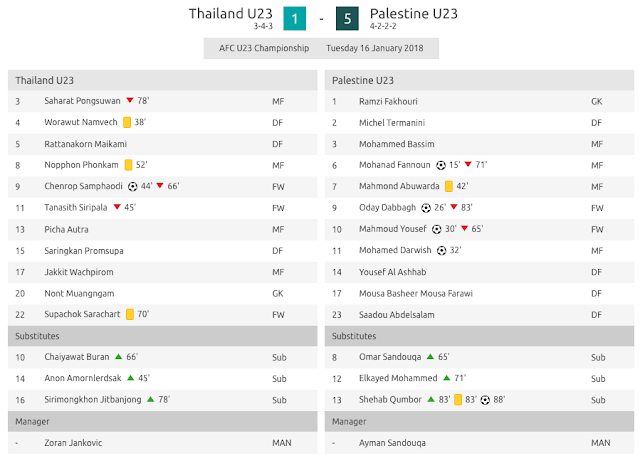 Recap: For the second straight game, Palestine started out like a house on fire. The constant pressing of the War Elephants resulted in chances in the opening stanza but the first goal would only come after 15 minutes. The source was unlikely; Mohanad Fanoun, who had been a sparsely used substitute in the first two games, thundered home the opening strike with a ball that traveled faster than 90kmph.

Palestine's confidence continued to grow and unlike Saturday's game against DPR Korea the chances were flying into the net. Oday Dabagh made it 2-0, minutes later Mahmoud Yousef, scored and that was followed by a cool finish from Arminia Hannover's Mohammed Darwish to make 4-0 after 32 minutes.

What would have been a perfect first half of play was spoiled when Thailand pulled back a goal just before the half. A good transition was played to the right wing and the resulting low cross found the on rushing Chenrop Samphaodi for Thailand's first goal of the tournament.

The second half was an exercise in patience, Palestine were keen to sit back and allow Thailand more possession while searching for chances on the break.

A fifth goal came late in the match- Shihab Qinbar who had collected a yellow soon after coming on as a substitute- broke an offside trap and finished cooly. The Jabal Al-Mukaber striker will miss the quarterfinal against Qatar due to card accumulation.

There were much needed goals in the other Group B match as well. Japan took a lead against DPR Korea after 32 minutes and doubled it just before halftime. There was cause for concern after the halftime as the Chollima pulled one back but with less than 20 minutes remaining Palestinian nerves were calmed when the Blue Samurai  made it 3-1 from the spot.


What I liked: The finishing. Palestine have shown that there is an abundance of attacking talent in this side. The end result- after many misses over the first two games- was emphatic. Palestine's five goals came from five different goal scorers. At the time of writing, they are the tournament's top scorers.

What I didn't like: Conceding the goal was sloppy and showed that Palestine's goalkeepers have two distinct but similar problems. Naim Abu Aker was criticized for straying too far from his line in the first game against Japan while current starter Ramzi Fakhouri seems to be stuck to his line.

Palestine seem incapable of winning a match 1-0 and under Sandouqa they have kept one clean sheet, against lowly Bangladesh, in 13 games stretching back to their participation in the Islamic Solidarity Games last April.

Man of the Match: A great team performance renders it difficult to pick out an individual. The AFC went with Oday Dabbagh and that seems to be as good a choice as any. His second goal of the tournament proved to be the winner in this game.

What's Next: Palestine will face Group A Winners, Qatar, on Friday January 19th. Kickoff is set for 11:30 GMT