This transfer window will perhaps be known more for the deals that did not happen as opposed to the ones that did.

Three national team players came close to moving- in some cases even signing- before backing out of deals.

Here's a rundown of the 2018 Winter transfer window:


Upset with late payments from Shabab Al-Khaleel, national team captain Abdelatif Bahdari decamped to Jordan and was close to signing only for the Hebron side resolve payment issues in the 11th hour.


Ahli Al-Khaleel's Mohammed Saleh moved to Jordanian giants Al-Faisaly but backed out upon discovering that he could only be played in Asian competition due to the club's foreign quota of three being occupied by four foreign players.

Shadi Shaban who had tried his hand abroad when he went on loan to CD Palestino in 2016 had signed with Saham. The mid table Omani side Saham snapped up Shaban on a free transfer but the midfielder left the team after less than a week in training.

The lack of professionalism (players were not showing up to training) caused the Acre native to pull the plug.

Saham's loss is Ahli Al-Khaleel's gain as yet another one of their players is set to remain and push for a first ever WBPL title.

Yashir Pinto Islame's Malaysian adventure has come to an end but his fantastic form at club and national team level have landed him a fantastic opportunity in the Chilean top flight.

He will be going back to Curicó Unido where he registered 12 goals and 4 assists in 23 matches across all competitions in the first half of 2015-16.

It marks a triumphant return for Yashir who had last played in the Primera in 2011 and had to work his way back up following stints in Canada, Germany, Hungary, and Malaysia.

One division down, Alexis Norambuena has signed for another season with Deportes Melipilla after playing a key role in their promotion.

Leo Zamora a former Palestine international took the helm of Rangers de Talca and one of his first moves was to bring in Rodrigo Gattas who had spent the past year on the books of Hilal Al-Quds and Uruguayan side Cerro.

After becoming the first Asian player to play in Liga MX, Carlos Salom is on to greener pastures. His time with Puebla started off well but things took a turn for the worse when an insensitive comment about the 2017 earthquake made the rounds in the Mexican media.

After being forced to train with the reserves, Salom voided the rest of his contract in order to join Bangkok United. He becomes the third Palestinian national team player to play in Thailand following Jaka Ihbeisheh and Matias Jadue.

Matias Jadue, whose time in Port FC resulted in virtually no playing time due to registration restrictions, has also found himself a new club.

Jadue will drop down a division and head south to link up with Krabi FC.

Palestine eligible Nazmi AlBadawi was long rumored to be heading to the MLS in the off season. His move to the ambitious Cincinnati FC, though will see him stay in the second tier of the American footballing pyramid.

For their part, Cincinnati FC could provide AlBadawi with a place in MLS in due course. They are one of the favorites to secure an MLS expansion slot in the not so distant future. 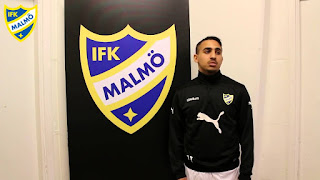 There has been one move as a direct result of Palestine's excellent AFC U23 Championship campaign. Mohammed El-Kayed who showed off his skills in midfield and attack for the young Fida'i will no longer be plying his trade in the lower leagues of Sweden.

His team Prespa Birlik had been relegated to the fifth division but he has instead taken a huge jump. With reports saying the Malmö native has agreed to a two year deal with Albanian league leaders Skenderbeu.

Three deals of note in the WBPL. Jaka Ihbeisheh was set to join Hilal Al-Quds but pulled out of the deal due to personal reasons. The club turned to Ibrahim Badran a 24 year old Palestinian-Dane for defensive help on the flanks.

Hilal Al-Quds also brought Jonathan back to the league after he fell out of favor with Egyptian side ENPPI.

Also returning form Egypt, Islam Batran has wasted no time in getting reacquainted with his old stomping grounds in Hebron. The speedy winger has 4 goals to his name in just three league appearances with the Reds.