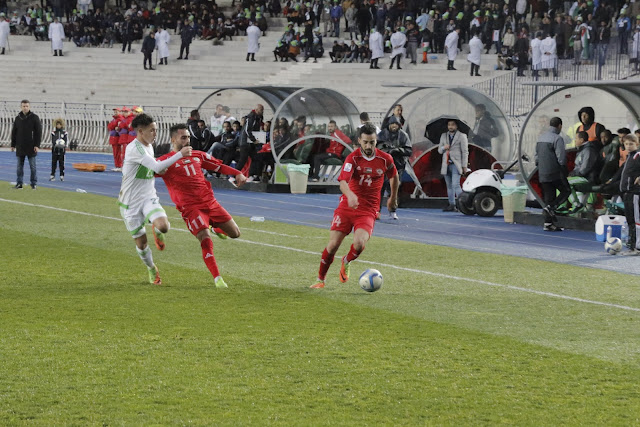 Highlights and more after the jump

Recap: A rainy Algiers played host to the second unofficial friendly between Palestine and Algeria's Olympic Team in two years. With the exception of a surprise return for Khaldoun Al-Halman, who had last played for the national team against Kuwait in 2012, the lineup closely reflected the preferences of former national team manager Abdel Nasser Barakat.

Palestine controlled without creating in the first half and it was Algeria who nearly got the first goal with a corner kick effort being cleared by Abdallah Jaber.

Palestine opened the scoring through Sameh Maraaba who had wasted close to half a dozen chances when the sides met here in 2016. This time however, the Qaliqilya native made no mistake finishing off clever interplay from Tamer Seyam and Musab Al-Battat with a thunderous shot.

Baldivieso made two changes at the half with Ahli Amman duo Mahmoud Wadi and Mohammed Balah replacing Khaldoun Al-Halman and Ahmad Maher Wridat.

The Bolivian tactician avoided making a slew of substitutions after that waiting until the 77th minute to make another change.

One of the changes was to bring on a defensive minded player (Shaban) for Sameh Maraaba.

A bit of skill from Batran and a penalty shout on Wadi was all that the game produced after the changes were made as the game petered out to a 1-0 Palestine win.


What I liked: The fullbacks (Jaber and Battat) played very well today, both players will be under the age of 30 when the next World Cup (2022) and Asian Cup (2023) come along and if everything goes to plan they will be bookends of stability for the national team.


What I didn't like: Friendlies are for sorting out the kinks and discovering players. Baldivieso did not really avail of the friendly to do either. What did we learn over the 90 minutes? Not much... if you missed the game, you missed absolutely nothing.


Man of the Match: The Algerian fans (although they didn't show up in huge numbers) were excellent as per usual.

What's Next: Palestine will camp in Saudi Arabia for the next three weeks before traveling to Manama to face Bahrain's national team in a final tune up before their final Asian Cup qualifier vs. Oman.