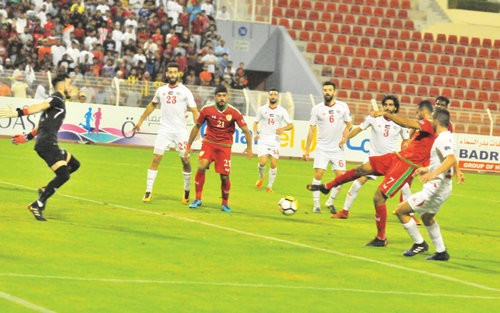 Recap: Palestine were set up in an extremely defensive fashion for the second straight game by Julio Baldivieso. The team sat deep and struggled to counter as it committed too few players forward. Things were not helped by a late injury to right back Mus'ab Al-Battat which denied Al-Fida'i one of its quickest players out wide. His replacement, Mohammed Saleh, struggled to replicate the width his teammate normally brings to the side.

The first 10 minutes featured a lot of passing between the defenders and with no heavy pressing from the Omanis it was hard to figure out what was being asked of the team tactically.

As a result, the Omanis racked up eight corners as a result of complete domination of possession and position. Al-Ahmar had to genuine scoring chances and could count themselves unlucky not to be in the lead after the culmination of the first half.

At the start of the second half, Baldivieso chose to bring on Mohammed Balah for Oday Dabbagh. The youngster was a surprise addition in the line up- especially given the fact that he had only joined up with the squad after the Bahrain game.

Things did not improve in the second half as Omani piled forward forcing the Palestinian defence into clearance after clearance. Mahmoud Eid came on and provided some intent but not enough impetus was given in attack as the midfield trio of Shadi Shaban, Mohammed Darweesh, and Mohammed Yameen rarely drove forward.

As seconds ticked away it seemed that Palestine would somehow hold on despite conceding 18 corners to their opponents. There was so little intent to change to outcome of the game that Baldivieso took off the substitute Mohammed Balah for Ahmad Maher Wridat.

Right after that substitution, the Omanis had their breakthrough Khaled Al-Hajiri sprung in the box and lashed home a shot that hit Bahdari and was adjudged to have crossed the entire line.

It might have been slightly controversial but it was the goal Al-Ahmar deserved. There was time for Palestine to launch one final attack- with Bahdari marshaling his troops forward there was finally enough numbers in the box to cause the Omanis concern.

Palestine's best chance came late in the game- Mahmoud Eid's switching ball found an overlapping Abdallah Jaber who put in a perfect cross at the far post. The ball was met by the head of an on rushing Ahmad Maher, who saw his shot parried away by Omani goalkeeper Fayiz Al-Rushaydi.

A 1-0 loss was flattered the performance which was by far the worst the national team has played in over three years.

What I liked: Baldivieso might get fired. It's hard to draw positives on such an epically mismanaged game but safe to say Baldivieso is not the man to lead Palestine at the Asian Cup. There have been murmurs that the PFA can get out of his contract by paying $30,000 (one month's salary). Watch this space.

What I didn't like:
Asian Cup Seeding: Palestine are locked into Pot 2 now. Meaning they will draw one of Iran, Saudi Arabia, Korea Republic, Japan, Australia, or the hosts UAE in their group.

What's Next: Palestine will host Kuwait on May 13th in Palestine.