Palestine advance to the knockout stage of the 2018 Asian Games 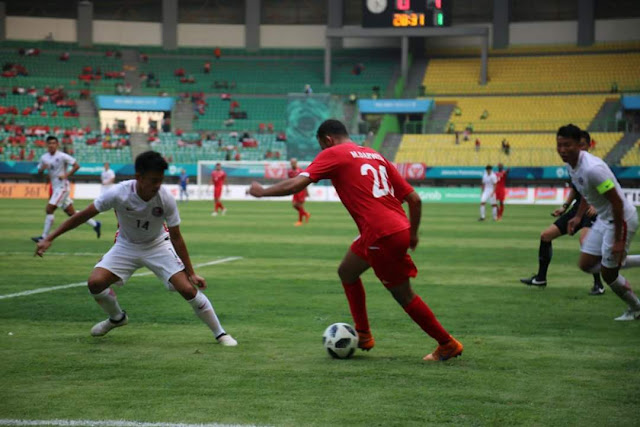 It was a marathon. One complicated by an inaspicious start but Palestine clinched their second straight konckout round berth at the Asian Games.

A win against Hong Kong on Friday could have delivered top spot in Group A but a second half mistake by Mahmoud Abu Warda let Hong Kong back into the game. Palestine pushed for a winner after that but could not find one after initally taking the lead through Mahmoud Yousef 14 minutes in.

Earlier in the week, Palestine defeated hosts Indonesia 2-1. Mohammed Darwish missed a penalty kick but Oday Dabbagh sprinted through to burry the rebound. In the second half, with the scores deadlocked, Darwish made up for his mistake. Let loose by Abu Warda's stellar pass, the Hannover man burried the winning goal high and to the keeper's right.

While the group was deemed easy at the onset, it proved to be anything but. Palestine twice played two games in two days- and played a total of four during the week. They were under pressure after dropping points in the first game and were really up against it after Laos scored early in the second game.

The Asian Games is never as straight forward as it seems. Earlier today, Malaysia beat tournament holders and favorites Korea Republic 2-1. It won't be the last surprise of these games.

As with any tournament; results matter more than style and Palestine delivered just that. The Olympic team has relied on various sources for its goals with five different players scoring each of the five goals. They have not lost and have shown an ability to fight through setbacks.

Ayman Sandouqa's men will now have six days off before facing the Group C runner up on August 23rd. That looks likely to be Syria but could also be UAE or China. 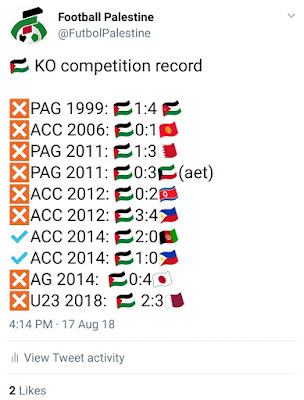 With the exception of the bow defunct Challenge Cup, Palestine have never won a knockout stage game. The target for this team should be to change that. A win on Thursday would make the tournament a success- anything beyond that would be a bonus. The end game for a core group of players- 11 of 17 outfielders- at these Asian Games is to plot a path to the 2020 Olympics in Tokyo.