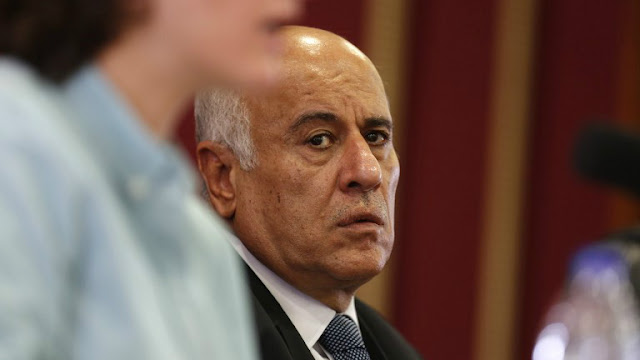 n a shock move on Friday, Football's governing body- FIFA- decided to suspend PFA President Jibril Rajoub for inciting violence due to comments made in regards to a proposed friendly between Israel and Argentina.

FIFA put out the following statement in regards to their decision: 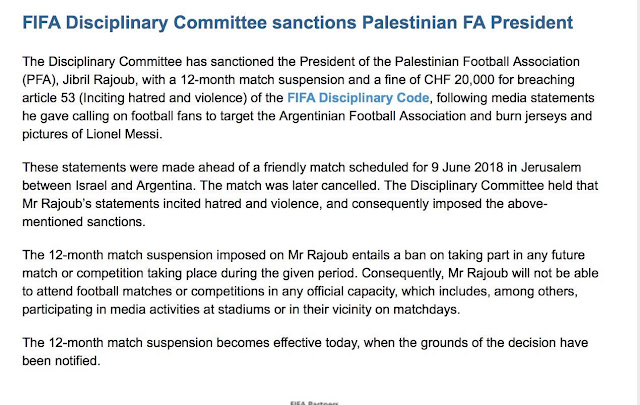 Israeli Minister for Culture and Sport Miri Regev pushed for the move and even allocated 2.7 million Israeli Shekels ($740,000) to move the match. That decision strengthened the hand of the campaigners who had already highlighted the connection to the US administration's decision to declare Jerusalem the capital of Israel- in contravention of international law.

By late May, there were already serious doubts whether the friendly between Israel and Argentina would take place.

Rajoub and the PFA only decided to chime in once a critical mass of support behind the campaign had formed. Rajoub, who harbors hopes of succeeding, Abu Mazen as President of the Palestinian Authority seized the opportunity to get involved and claim credit.

He organized a sparsely attended protest on June 3rd in front of the Argentina consulate in Ramallah and said:

"We will target Argentina and we target Messi. We will ask people to burn Messi's [Jersey] and his picture if he decides to participate in this event...... but we still hope he will not."

The comments were at best unnecessary, and unbefitting of a man in charge of developing and nurturing a sport built on the values of fair play.

Rajoub had not lent any support to the Argentina No Vayas campaign until that fateful day in June. The game was cancelled three days later.

The comments mean Rajoub will no longer be allowed to participate in any official footballing activities for a full calendar year. He cannot be near the team or stadium on match days but will remain relatively free to run the day-to-day affairs of the Palestine Football Association. It is the lightest suspension he could have received from FIFA.

The PFA released this statement following the announcement of the suspension:

A history of controversy

This is not the first time PFA President has courted controversy with his outlandish comments. In 2016, he called Palestinian Christians the "Merry Christmas bunch" in a dismissing manner.

The previous year, he spent much of his energy trying to get Israel's FA suspended from FIFA. The overt politicization saw FIFA preferred to take no stance on the issue, failing to apply precedence with the Israeli clubs based in settlements (Crimean clubs were blocked from playing in the Russian League in 2014).

The former Head of Internal security for the Palestinian Authority was accused of intent to fix a match when he was caught on camera telling Iraqi players "I hope you win against us and advance to the quarterfinals." That statement upset Jordan who was also jockeying for second place at the 2015 Asian Cup group stage.

Also in 2015, Rajoub failed to protect Palestine's right to host matches crumbling under Saudi pressure to move a World Cup qualifier in June on short notice. The Saudi FA had promised to play the original fixture in October but then failed to live up the initial agreement.

During the early part of his tenure, he stated in an interview that the reason he supported Women's football because "[presenting] women in shorts to the world was preferable to presenting women in hijab"

In his place, Abdul-Majid Hijjeh will take over responsibilities the post PFA President for the year. Hijjeh previously served as General Secretary of the Football Association and Olympic Committee.

Hijjeh is a similarly controversial figure with little sporting experience. One person involved with the national team told me that he had referred to them as the "team of seven socks"- an Arabic idiom meant to refer to their amateur nature- ahead of the 2014 Challenge Cup.

Jibril Rajoub's modus operandi is still firmly in place. The Palestine Football Association will not radically change; funds will continue to disappear and the interest of the players will never be put first.

New ideas and a vision for football in Palestine is needed. This suspension might be seen as an overreaction on the part of FIFA but the truth is that FIFA has turned a blind eye to the antics of the PFA for too long.