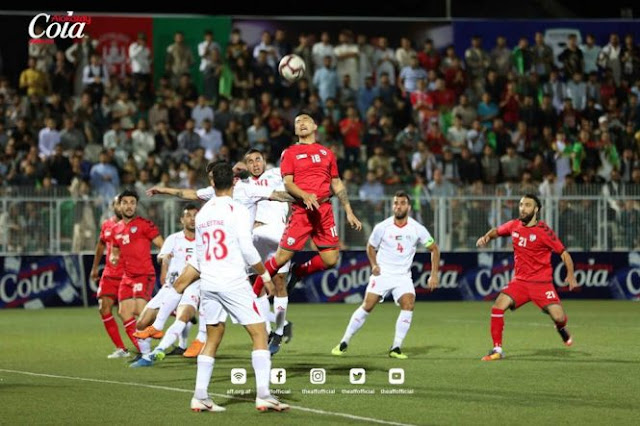 
Recap: Mid August friendlies are a rarity and this encounter showed why they should be kept that way. Palestine started as the better of two sides and had four good scoring chances through Mohammed Maraaba, Haitham Dheeb, and Abdelhamid Abuhabib. These chances were created in spite of a right fright flank that features an ubknoun youngster at RB and a holding midfielder as a winger. The second half was mostly forgettable with the exception of a solid cameo from Hilal Mousa who set up Maraaba for what should have been a goal and putting a shot wide himself. Interim head coach Noureddine Ould Ali refused to change the dynamic of the have late on and opted to bring on a defensive minded player for Maraaba to close out the game.

What I liked: I think this might have been am am unofficial friendly. Official or not, I was happy that Afghanistan's much beleaguered fans were happy, if only for a short time. Afghanistan has way better jerseys than we do. Their TV production is also a cut above Palestine Sport who resorted to illegally steaming the match on air.


What I didn't like: There is a time and place for these types of matches and having the national team travel to Kabul right before Eid seems slightly unnecessary. Afghanistan is a fine team but in terms of preparation; not a single opponent we will face at the Asian Cup can mirror what Afghanistan has to offer. They did not manage a viable threat on goal and were bailed out by their goalkeeper on more than on occasion.

Perhaps the point of this friendly was to test depth and weed out players that are not up to snuff? But in that case why not play Hilal Mousa from the start? Why play an unfit Jonathan? Why not play a younger player next to Dheeb in defence?

No goals and no wins in six games in 2018 is deeply worrying.

Palestinians Abroad: For the first time in a long time. Palestine's national team was made up  entirely of players who play their trade in the WBPL. While the depth is nice to see it does highlight that the pipeline of players from abroad is needed help cover for certain deficiencies.

What's Next: Palestine are due to avail of all upcoming FIFA dates by playing China, Bahrain, Kyrgyzstan, and Qatar in September and October.