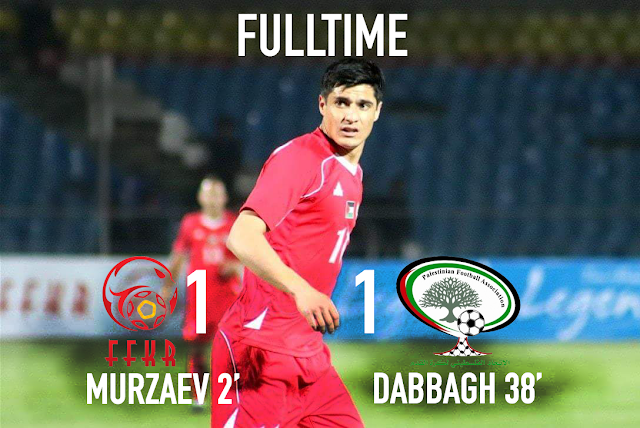 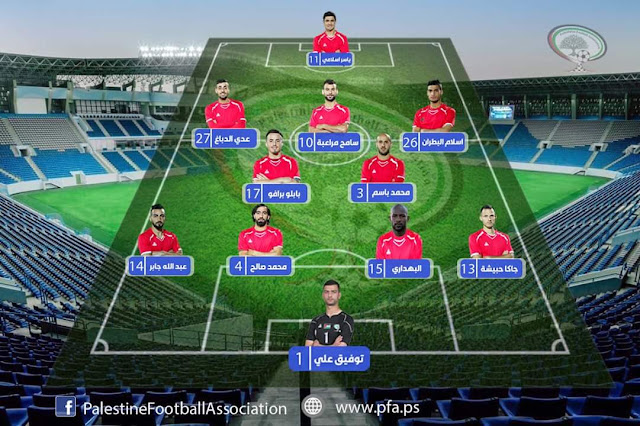 Recap: An atrocious error from Abdelatif Bahdari inside two minutes set the tone in the early stages of the game. Palestine had started with the intent to move the ball quickly in order to catch their Kyrgyz hosts out of possession and all seemed well until Bahdari dawdled on the ball too long and allowed his counterpart, Mirlan Murzaev the opportunity to nick the ball. A faster goalkeeper might have been able to react to cut out the danger but Toufic Ali could do very little to prevent the opener from the Kyrgyz captain.

Four minutes later, the goalscorer was subbed off having had a very productive, if extremely short, game. To their credit, Palestine kept their cool and found a way to threaten Kyrgyzstan. For their part Kyrgyzstan still presented a viable threat on the counter attack. In the aftermath of the opening goal, Toufic Ali was visibly nervous flapping at a number of balls he could have caught.

Palestine's equalizer was to come from the youngest player on the pitch. In the 38th minute, Islam Batran drove down the left flank leaving several Kyrgyz players in his wake- his pinpoint cross found the forehead of Oday Dabbagh who made no mistake from three yards out. With that goal he became only the second teenager to score for the national team.

Palestine would continue in the ascendancy. In the first 10 minutes of the second half, Islam Batran could have given Palestine the lead but sliced his shot wide of the far post following a fast break. Moments later, Sameh Maraaba failed to beat the keeper in a one-on-one and was then quickly hooked for Al-Masry forward Mahmoud Wadi.

Soon after that a positively muscular approach was adopted with Mahmoud Eid coming in to replace Islam Batran.

A good spell of possession nearly saw Yashir Pinto Islame give Palestine the lead only for Matyas to deny him with a good save. The ensuing corner resulted in a blistering counter for Kyrgyzstan that did not yield fruit. Pavel Matyas was then called into action twice turning in to brilliant saves to keep the score level.

Palestine's goalscorer gave way in the final quarter hour. Hilal Mousa was the man tasked with setting up a winning goal but it was Kyrgyzstan who would come closest in the final stanza with an amazing effort rattling off Toufic Ali's crossbar.

In the final 10 minutes, Palestine were forced to make an emergency substitution after a clash of heads knocked out Mohammed Saleh. His centerback partner, Abdelatif Bahdari, would also exit the pitch.

Despite the numerical disadvantage, Palestine would hold on for a draw in a performance that showcased character and resolve in difficult circumstances.

What I liked: Historically speaking, when Palestine concedes first things do not go well. In 151 games Palestine has managed to overturn a losing result once in regular time- a 3:1 defeat of Myanmar in 2012 AFC Challenge Cup qualifying. Palestine were playing without several mainstays in this game: Rami Hamadi, Haitham Dheeb, and Mohammed Darweesh and yet they still managed to get an equalizer and had more chances to grab the win.

That said, RESULTS ARE NOT IMPORTANT NOW. It's hard to adopt this mindset because Palestine plays so few games but this really needs to be the mantra heading into the Asian Cup. This friendly, allowed manager Noureddine Ould Ali to hand another start to Mohammed Saleh, Islam Batran, and Oday Dabbagh. All three did well; as did debutant Mohammed Basim.

The other big experiment was Jaka Ihbeisheh being deployed as a right back and it was a successful trial by all measures. The Slovenian-born player used his speed when needed to good effect- getting up and down the right flank without exposing the backline.

What I didn't like: Also on full display tonight were Palestine's limitations. The fact that Toufic Ali is an injury or red card away from possibly starting at the 2019 Asian Cup is a terrifying prospect. The goalkeeper is the antithesis of current #1 Rami Hamadi. Unable to play with his feet- his defenders are left with option of hoofing it forward. His confidence was shot after the first goal and he was reluctant to catch balls (which should be his forte).

I also fail to understand what Sameh Maraaba has done of late to deserve a spot in the starting lineup. His finishing is not clinical, nor is his movement threatening, and he failed to link up with Yashir Pinto Islame who had to drop back to make up for the lack of service. (Ironically enough it was Islame who set up two great chances in the second half- one of which was spurned by Maraaba).

Finally, it's become quite obvious that Abdelatif Bahdari is on his last legs as an international footballer. We have long known that he is not as fast as he once was but today showcased errors in judgement that nearly cost Palestine the game. While there are a bevy of options to replace Maraaba - the only real replacement for Bahdari is Dheeb, Saleh, or perhaps fielding Alexis Norambuena out of position. Here's hoping this is the worst we see of the captain.

Youngsters stepping up: Oday Dabbagh is far from the finished product but an opportunistic goal will further bolster his case for inclusion in the Asian Cup squad. Mohammed Basim's great performance might mean he forces out Odai Kharoub and Mohammed Yameen- who have been dropped from the latest squad. This is what friendlies are for- to find out what you have at your disposal and to put together 23 players comfortable in their roles and assignments.

What's Next: Palestine will face Qatar in Doha on September 11th.