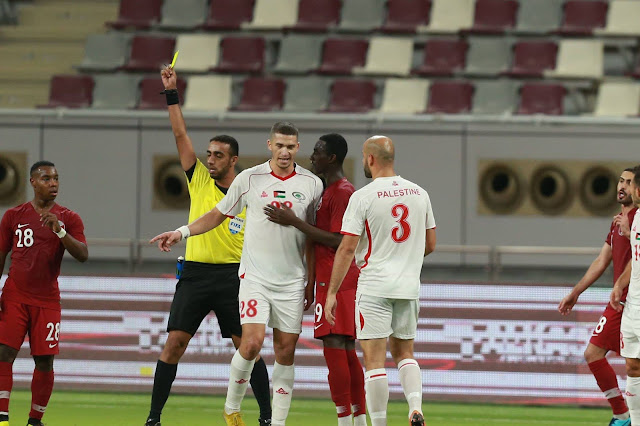 Recap: For the second time in the space of the week. Palestine went behind mere seconds after the opening whistle. A header from Almoez Ali opened the scoring much like it did back in November when the two sides met in the quarterfinals of the AFC U23 Championship.

It was a killer blow to Toufic Ali's confidence. It had seemed that Nourredine Ould Ali would revert back to Rami Hamadi but it was the Taraji Wadi Al-Nes shot stopper who got the nod for his 29th cap. The goalkeeper was not helped by the ramshackle pairing of Mohammed Basim and Tamer Salah in the center of defence.

The captain for the night was at fault for the second goal of the night- playing Qatar onside and getting completely clowned by Akram Afif. A good deal of blame can also be given to Shadi Shaban who played a loose ball backwards.

Toufic Ali's positioning was off on a number of occasions and it was punished again after 30 minutes after he failed to collect a cross and then failed to get his feet set and challenge Hassan Al-Haydos's goal.

For their part Palestine presented a threat from their physicality but it appeared that the inclusion of Eid, Islame, and Wadi in the same lineup sacrificed a more natural passer and shape shifter. 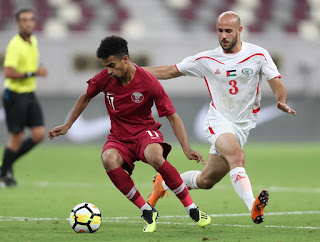 The end of the first half featured a minor skirmish after Akram Afif decided to get involved in a disagreement between Abdelkareem Ali and Yashir Pinto Islame. The second didn't feature anything of note. A lot of that had to with Jaka Ihbeisheh acting as a fifth defender- with Musab Al-Battat tucking in.

Of the substitutes, Islam Batran showed that he is fully deserving of every minute he gets with the national team. His tireless work rate resulted in Palestine's best scoring chances- nearly setting up Abdelhamid Abuhabib and then nearly scoring off of Jaka Ihbeisheh's pin point cross. The two combined yet again, in injury time- with a truly impressive kick save from Yousof Hassan denying the 24 year old.

A loss can sometimes tell you more than a win and that was definitely the case today. Several players should be worried about their chances of making the Asian Cup squad.

What I didn't like: There are two other goalkeepers in the squad. I understand not wanting to risk Rami Hamadi but this would have been a good opportunity to see what Khaled Azzam has to offer. Toufic Ali has been a flawed product since he appeared on the scene. At Olympic level, he was not even trusted in taking goal kicks. What was needed tonight- with a new CB pairing was a steady presence in goal and not having that colored the result.

Of the more established players, Musab Al-Battat showed that he lacks the defensive nous and needed against superior opponents.

What I liked: We learned some things today. Toufic Ali cannot be relied upon nor can Tamer Salah. Their chances to even make the Asian Cup squad took a massive hit. Shad Shaban is out of shape and at this rate he might make the trip to the UAE  just for the lack of viable alternatives. Without a solid base (goalkeeper, centre backs, and midfield) it became nearly impossible for Palestine to utilize their attacking pieces.


What's Next: From October 1st to October 12th, Palestine will have 3-5 unofficial matches in Bangladesh against the likes of Tajikistan, Nepal, Philippines, India, and the hosts. Their next official match is against Bahrain in Manama on October 16th.
2018 Friendlies