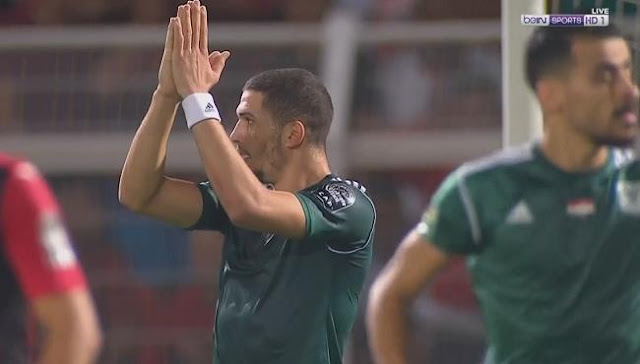 Mahmoud Wadi's meteoric rise continues. A little over a year ago, the powerful forward was trapped in Gaza unable to play for his club side- Ahli Al-Khaleel- in the West Bank.

A fortuitous offer from Jordan combined with a brief opening of the Rafah crossing in late August 2017 conspired to give Wadi a shot at realizing his potential.

He has not looked back since.

Fans became anxious after a goalless return on his first five games in the league (226 minutes) although the Palestinian did assist twice in a 2-2 draw vs Ittihad Alexandria.

Wadi, who has always had a knack for scoring in big games, saved his debut goal for the biggest stage of them all.

A spectacular back heel goal in the first leg of the CAF Confederations Cup quarterfinal broke his duck.

The return leg in Algiers saw him make it two in two. Setting up and then finishing his chance with a powerful header at the back post.

Fully aware of USM Algiers's support for the Palestinian cause, The Tower chose not to celebrate his goal.

Al-Masry will now look to qualify for their first ever continental final. They reached the semifinals of this tournament's predecessor- the African Cup Winners' Cup- once before, in 1999.

Wadi's goals make him the first Palestinian to score more than one goal in the knockout stages of a continental club championship. Surpassing Abdelatif Bahdari (1 for Wehdat in 2011 AFC Cup) & Hosam Aiesh (1 for Östersunds in 2017/18 Europa League).