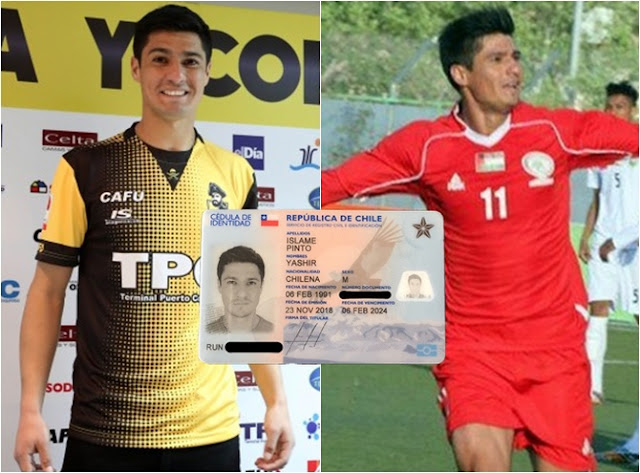 Palestine national team forward Yashir Pinto Islame took to to social media yesterday to announce that he has officially reordered the sequence of his last names.

In Spain and Latin America, individuals take on the surnames of both their parents with their father's last name becoming the primary last name that is passed on to offspring.

For example, Barcelona and Spain legend Andrés Iniesta's fully name is Andrés Iniesta Luján but his second surname is rarely used. His children will not carry Luján as a surname- instead taking their mother's maiden name as a secondary surname.

Many national team observers mistake the primary surname as a middle name which has led to the misnaming of several national team players by Arabic and English language outlets. Jonathan Cantillana Zorilla and Pablo Tamburrini Bravo have been incorrectly referred to by their secondary last names Zorilla and Bravo.

In his social media post, Yashir stated "After a long wait, I can finally say it's official, I have wanted this since I was a child. I can now carry the last name I have identified the most with. I firmly believe that name is part of identity and to place the name Islame first carries much importance for me."

The change will allow El Jeque to wear Islame on the back of his shirt in the Chilean league.

"I want my children to carry this name and to identify with it as much as I do. I am proud to be Palestinian and to have the ability to represent, through football, many people who cannot raise their voices." concluded the Santiago-born forward before signing off with his new name, Yashir Islame Pinto.