The friendlies are over, the final squad is set and less than a week separates us from Palestine's much anticipated 2019 AFC Asian Cup opener vs. Syria.

The most debated subject matter amongst fans for the past month has been the composition of the squad. The fact that there is such a debate is indicative of the depth Palestine now possess, especially in attack.

Without making any bold predictions as to how Palestine will do it's blatantly obvious that this is not the same side that contested the 2015 AFC Asian Cup.

To refresh your memory; let's have a look at that squad: 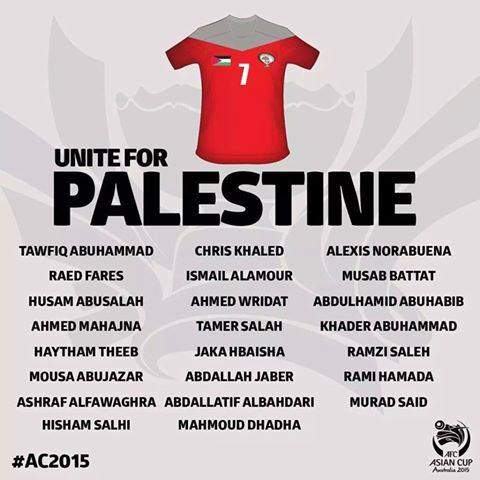 Who could forget this squad announcement? With fans scrambling to find out who this mysterious Chris Khaled was (it was Khaled Salem) and with question marks surrounding the participation of Alexis Norambuena and Haitham Dheeb (they didn't even make the bench and weren't replaced). The composition of the squad was so unbalanced it was laughable; Palestine had only two natural centrebacks and a makeshift right back (Mahajneh) was deemed a better fit to start the first game.

Speaking of right backs; this squad was full of them Mus'ab Al-Battat, Ahmed Mahajneh, Raed Fares, and the injured Alexis Norambuena.

Despite only having 21 players to call upon, two players did not play a part in any of the matches: Mousa Abujazar and Raed Fares. The team was toast ten minutes into their Asian Cup debut; Japan scored early and figured out they just needed to bottle up Ashraf Nu'man and Abdelhamid Abuhabib to stifle any attack. They were well and truly out of their depth.

The sad part is, these were well and truly the best Palestine had in a lot of positions. If you doubt that, just look at the players that were snubbed from the squad (conditional on the player being capped at least once). 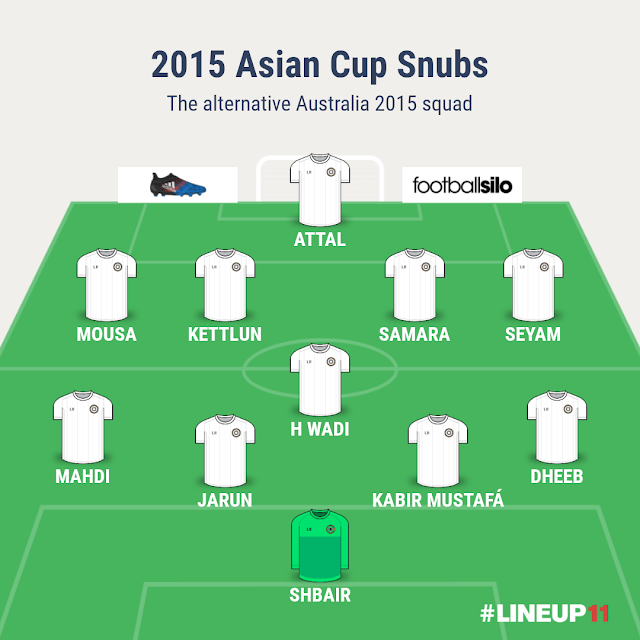 Yes there was a surfeit of centre backs we could have taken but there was not one capped full back who could count himself unlucky not to be there.

The same goes for the centre of the pitch. You could have mad an argument in favor of the 33-year old Roberto Kettlun; but are any of the names there better than the ones included in the squad?

The situation was more dire up top. Palestine had no striker; they couldn't get Matías Jadue naturalized in time and the WBPL could only offer attackers who hadn't scored with national team in over two years.

Fast forward four years and we have a pretty strong lineup of snubbed players. In fact, it includes a superstar in an Asian League (Jadue), one- potentially two- players plying their trade in the Swedish top tier (Awad and Eid), and an important member of Jordanian league leaders Al-Jazeera (Batran). 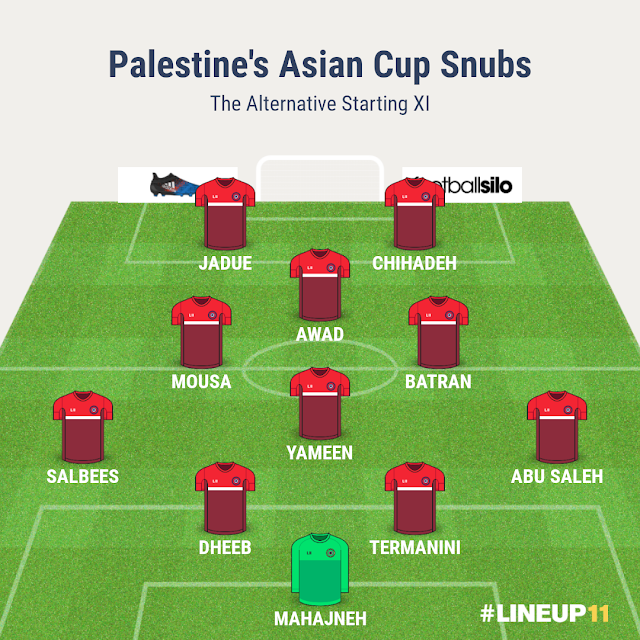 On top of all that, Saleh Chihadeh who has been a goal machine in Switzerland has also been excluded.

Whatever your opinion on the nature of these exclusions; one thing is clear- this side is much better in terms of sheer talent than the one that competed in 2015.

How the decisions were made 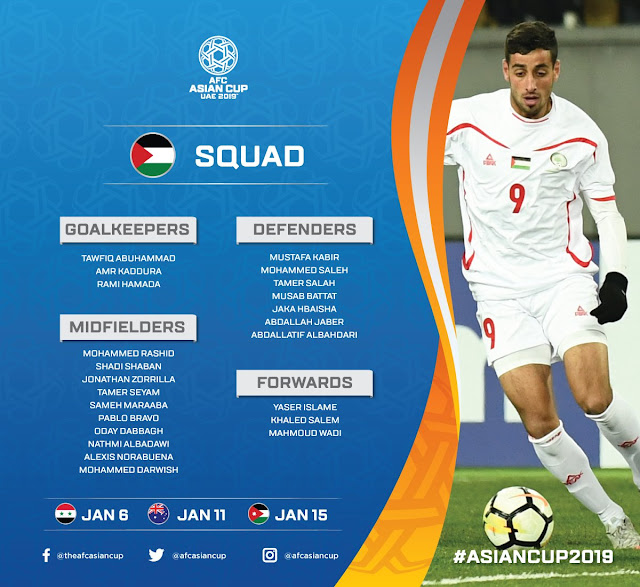 To understand Noureddine Ould Ali's thinking you must understand that there is a genuine desire not to repeat the mistakes of 2015. This is why the squad is essentially composed of two players at each position.

There are two left backs (Alexis and Jaber) two right backs (Ihbeisheh and Al-Battat) and four centre backs (Bahdari, Saleh, Kabir Mustafá, Salah). There are also four non-attacking midfielders; so one thing is clear- there will be no defensive crisis if a player is injured or booked.

(Ed. note: Shadi Shaban might have to pull out of the squad with an injury.)

The left side of midfield will be occupied by players who are truly left footed (Seyam and Dabbagh) while the forwards all fit into the Algerian's preferred 4-2-3-1 system.

As far as the composition of the squad is concerned it is one based on sound reasoning with very few gambles. The cast of players are the same ones that proved themselves capable of coming from behind against China and Iran so there is no reason to sound the alarm just yet.

Do not blame Ould Ali for these exclusions

Ghanem Mahajneh, Haitham Dheeb, & Alaa Abu Saleh are not here through no fault of the coaching staff.

Three players that should be on the plane to the UAE but will unfortunately miss the chance to represent their nation on the biggest stage in Asia.

Haitham Dheeb's situation is a familiar one despite being one of Palestine's best players he is firmly focussed on his future and has maintained a full-time job as a teacher. Four years ago, the school's administration told him he could not travel for the Asian Cup.

This year the consequences were far more sinister. The Jerusalem school where Haitham Dheeb is currently employed now has a far less understanding administration and Dheeb was told in no uncertain terms that if he continued to play for the Palestinian national team that he would be fired from the school and banned from teaching at any school in the Israeli educational system.

Upon hearing this, the Palestine Football Association did nothing so Dheeb's brilliant national team career came to a premature end.

Ghanem Mahajneh and Alaa Abu Saleh left their WBPL clubs to play in the Israeli leagues. Again the PFA chose not to change its policy in regards to calling players from the Israeli league. At the very least in could have at least interceded to keep key players from becoming ineligible to play for the national team.

Why did [insert name here] miss out?

Putting together a squad of 23 players is no easy task and perhaps the most challenging issue is dealing with players who may not see the pitch for a single minute during the tournament. As we saw four years ago, there is no sense in taking a player who will pout and complain instead of supporting his teammates.

In any Facebook page composed of Palestinian fans the name of Ashraf Nu'man is bound to come up. While Ashraf might be the most skillful player in the WBPL there are certain factors blocking his participation. As evidenced by his decision to go back to the WBPL, he is not a player comfortable in being outside his comfort zone. Nor is he the kind of player who will accept a role as a super sub. While there are moments the Taraji Wadi Al-Nes player shone through with the national team in 2015 and 2016; there are just as many signs of him making the wrong decision. It is so blantat, that a highlight reel of Ashraf Nu'man electing to dribble endlessly instead of releasing a teammate could easily be put together.

The other names that come up often are Hilal Mousa and Islam Batran. Their exclusion is a little less clear but it's important to note that they occupy roles that are loaded with talent. The same could be said about Ahmed Maher Wridat who scored two crucial goals off the bench in Maldives to kickstart Palestine's Asian Cup qualifying campaign.

Matías Jadue fell victim to injury earlier this season and despite starting his career in Vietnam like a house on fire; there were doubts as to his ability to get match fit. The Chilean-born forward also competes in a crowded space with many other talented forwards.

The most glaring omission from the preliminary squad?

An Allsvenskan player who was the best player on a bad team did not get much time to state his case. His four appearances with Palestine all came as a substitute and a relatively good return of three goals and four assists with Dalkurd was not enough to grant him a reprieve.

The writing was also on the wall for Saleh Chihadeh who simply did not have enough time to make an impression and is a very different forward to Yashir Islame and Mahmoud Wadi.

The big surprise was Mahmoud Eid. In his last two games with the national team he assisted a goal and had a hand in setting up another. This is perhaps the biggest point of contention most have with the squad why were two established players in Switzerland and Sweden excluded in favor of Khaled Salem? A player who is having a great WBPL season but who has had a tumultuous career to say the least.

The exclusion of the Kalmar FF forward may just be down to Ould Ali's aforementioned conservatism and the simple fact that he views Khaled Salem as an X-factor type player.

Can these players deliver?

There is no hiding behind the fact that Palestine got one of the most difficult groups imaginable. Australia are the holders, Syria were regarded as the strongest team from Pot 2, and Jordan was head and shoulders above the other Pot 4 teams.

That said, this is rightly regarded as the group fo death for a reason- it will be tough for everyone. With Australia blasting Kuwait (4-0), Lebanon (3-0), and Oman (5-0) perhaps a Ould Ali's defensive mindset is a prudent approach,

Contrary to popular belief, the matches against Syria and Jordan will be dogfights and the winner may just be the team that commits fewer mistakes.

Look no further than Group B- not at this Asian Cup- but at the previous World Cup. The teams that finished in the top 3 banked on one ugly win. Iran and Portugal were outplayed but Morocco but nicked a set piece goal to get all three points. Spain won a single game in the group stage; and they were less than convincing in that victory against Iran.

The evidence suggest that Palestine can grind out low scoring results and there should be enough firepower to go all out if they find themselves trailing.