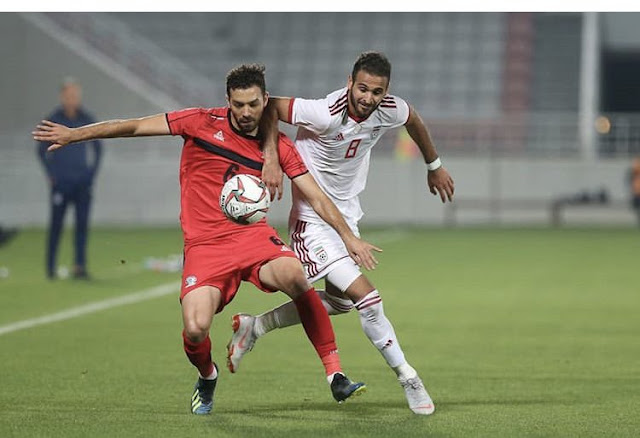 Recap: For the second straight match of the Doha camp, Palestine played behind closed doors leaving nearly all in the press corps to speculate as to the details of the game. According to second half reports, Iran had good chances to score in what would ultimately be a scoreless first half. Ashkan Dejagah, Mehdi Taremi, and Mehdi Torabi. Palestine, for their part, also squandered some good chances of their own.

The game's opening goal did come, in the 50th minute, courtesy of Mehdi Taremi, who had been the most threatening player for Iran.

Palestine would strike back at the death through one of its substitutes- Jonathan Cantillana, who headed home a cross from Abdallah Jaber- stretching Palestine's unbeaten streak to seven matches; the second longest such streak in national team history.

What I liked: The last time these two teams met Palestine were drubbed 7-0 and that was after Mohammed Shbair made some incredible first half saves that prevented the Iranian from opening the scoring for 45 minutes. Tonight went some ways to putting that shameful result to bed. Iranian fans on Twitter expressed their displeasure with the result. Many probably had thoughts of that friendly in their memory.

What I didn't like: Khaled Salem. To me it was clear that the Merkaz Balata man was not cut out for international football during the China game when completely wasted a break by shooting instead of squaring the ball to Yashir Islame. His 25 caps across seven years shows that more than one manager thought he could get the player to preform consistently. With his substitute scoring, this should be the end of the road for the forward but he's got a funny habit of sticking around. The only player in the squad on the pitch in Tehran seven years ago still with the national team- none other than Khaled Salem.

Records Fall: Jonathan Cantillana became just the fourth player to score double digit goals for Palestine. He pulled even with Ziyad Al-Kord on 10 official goals and is just five away from Fahed Attal's record and a brace away from pulling even with Ashraf Nu'man). Abdelatif Bahdari became the most capped defender in national team history and third most capped player surpassing Saeb Jendeya.

Cuts?: What will be Noureddine thinking when he trims the squad by five? Will Tamer Seyam's knock in HUSA Agadir's CAF Confederations Cup tie rule him out? Are you more likely to make the squad if you played or didn't play in the last two friendlies?

What's Next: Palestine will play Iraq in their penultimate pre-Asian Cup friendly on December 28th.