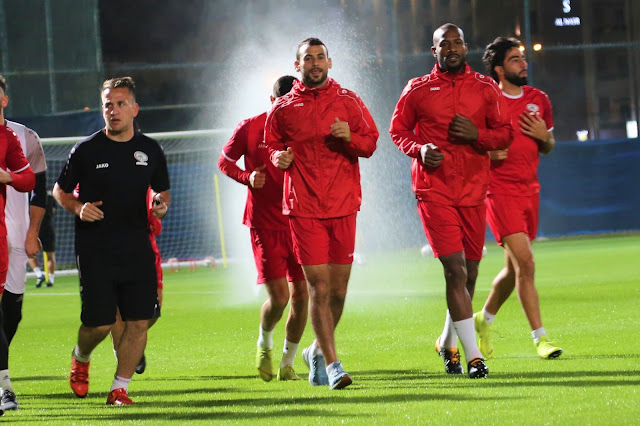 Everything went to plan in Palestine's opening of the 2019 AFC Asian Cup. The mission for Noureddine Ould Ali's men was to not lose against one of the tournament favorites, Syria. After effectively neutralizing the Qasioun Eagles, Palestine found a way to hang on with just ten men on the pitch for the final quarter of the game.

A point- their first at an Asian Cup finals- means the group unfolds exactly as they wanted it to. Pre tournament calculus called for a point against Syria, a narrow loss vs. Australia, and a win against Jordan in order to advance, most likely in third place.

If everything went to plan for Palestine then Australia's plans to top the group might have just evaporated. Despite a slew of injuries the Socceroos were expected to make easy work of Jordan much as they had in their previous encounters with Arab sides in their warmup friendlies.

Instead they conceded a set piece goal, one that was extremely Australian in nature, with Anas Bani Yaseen flying into the Al-Ain skies to head home off a corner kick. Changes to the lineup in the second half improved the Socceroos but they never quite looked like scoring.

The Socceroos need to find someone to get them goals and in the absence of Jedinak and Cahill that player- or players- needs to make themselves known as soon as possible.

Palestine's point against Syria came at a heavy price- the double booking and ejection of Mohammed Saleh means Al-Fida'i's weakness will be on full display. Who takes Saleh's place remains a mystery- will it be Tamer Salah who has been prone to make mistakes? Or will there be a reshuffle? Musab Al-Battat or Alexis Norambuena out of position?

Is Daniel Kabir Mustafá match fit? If he is- can he go the full 90? If Palestine are to get anything from this match, Saleh's replacement will have to step up in a big way.

Look no further for EVERYTHING you need to know about Palestine, thanks to @FutbolPalestine founder @6mikdadi.

A little light at the back 🤔

Rejig of the Attack?

Palestine failed to create enough chances against Syria and that led to a disappointing zero shots on goal. This may just be the time Noureddine Ould Ali chooses to change things by going to his bench. In midfield, I would expect Pablo Tamburrini to make way for the more physical and energetic Mohammed Rashid. The question is whether Palestine will play with a third defensive midfielder in Shadi Shaban or continue in a 4-2-3-1.

Palestine will need to find a way to hurt Australia on the break; either with better distribution from a player like Nazmi Albadawi or through faster players like Oday Dabbagh or a combination of the two.