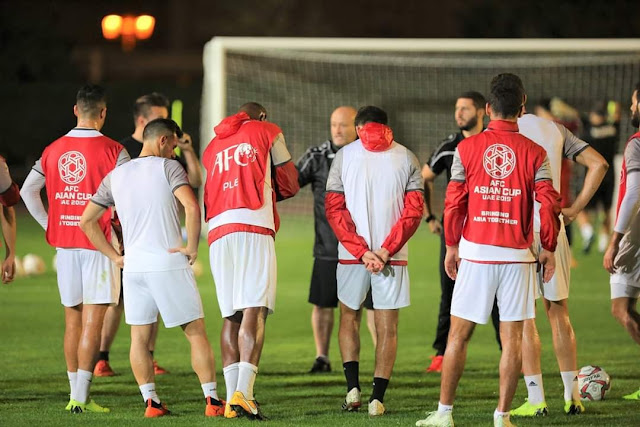 Warm welcome for both teams

With large expatriate communities of Palestinians and Syrians throughout the UAE, this match is set to be one of the most well-attended fixtures of the competition. Fans of both teams made sure to welcome their heroes in style with large groups of fans greeting the players upon their arrival in the UAE.

The frenzy has led to Ticketmaster selling out of its allotment of tickets which pretty much confirms that this fixture will enjoy fantastic fan support. There was considerable worry that crowds at the 2019 AFC Asian Cup would be hard to come by, as the local league struggles to attract spectators despite several big name stars.

The only question is which team will be better supported in Sharjah.

Palestine find themselves heavy underdogs for this fixture with the rest of the Asian footballing community fixated on the likes Omar Al-Somah and Omar Kharbin. It's a role that Palestine is no stranger to having been the underdog for most of their modern existence and its one that suits them better than the role of the favorite.

Syria on the other hand will have to cope with the pressure of expectation from their supporters and the general public. The Qasioun Eagles have become a popular dark horse choice in this tournament, despite the fact that Syria has failed to reach the knockout stages in five previous participations.

This will be the first time the Syrians play a competitive match under their manager Bernd Stange who has courted controversy for his exclusions from the squad. He had a very public falling out with Hamid Mido and Aias Osman and banished Firas Al-Khatib and Gabriel Somi from the side.

With most Syrian fans expecting an easy win- there could be serious recriminations should the Qasioun Eagles come away with a draw or a loss.

The last time these two teams was six years ago in a doubleheader before the 2012 WAFF Championship. Palestine came away with a 1-1 draw in the first match and went one better three days later registering a 2-1 win- their first ever against Syria.

Syria's young team would go on to win that 2012 WAFF Championship and Palestine's older generation of players would come good as well, winning the Challenge Cup 18 months later and qualifying for the 2015 Asian Cup.

Of the players that played against Syria in that double header only one- backup goalkeeper Tofic Ali- is still around.

Syria on the other hand have drawn heavily from that team. Omar Kharbin's first cap came in the 2-1 loss and of the 14 players that played in the 2012 WAFF Championship final eight of them are part of Syria's final squad. The likes of Al-Somah, Kharbin, Al-Mawas, Jwayed, Al-Mobayed, Al-Salih, Zaher Midani, and Ajaan in addition to Mardik Mardikian and the now starting goalkeeper Ibrahim Alma.

Despite Syria's historical superiority- they lead the series with 4W 3D 1L- little can be gained by looking to the past these teams have evolved to become better in two very different ways. Palestine's generational shift to players born after 1992 happened in 2015 whilst Syria implemented the plan three years earlier.

Syrian winger Mahmoud Al-Mawas will miss out due to his red card against Australia in the 2018 World Cup playoff between the two sides. The Al-Hama native had a knack for big game moments scoring six goals in world cup qualifying including two goals against China that netted a total of four crucial points. He will likely be replaced by Osama Omari who also plies his trade in the Qatar Stars League.

Palestine have no suspended players but do have a significant injury worry. Shadi Shaban is an injury worry but Nourredine Ould Ali has made no overtures to players on standby. Barring an eleventh hour change, it looks like Shaban will remain with the side but might not be fit enough to play a part in this match.