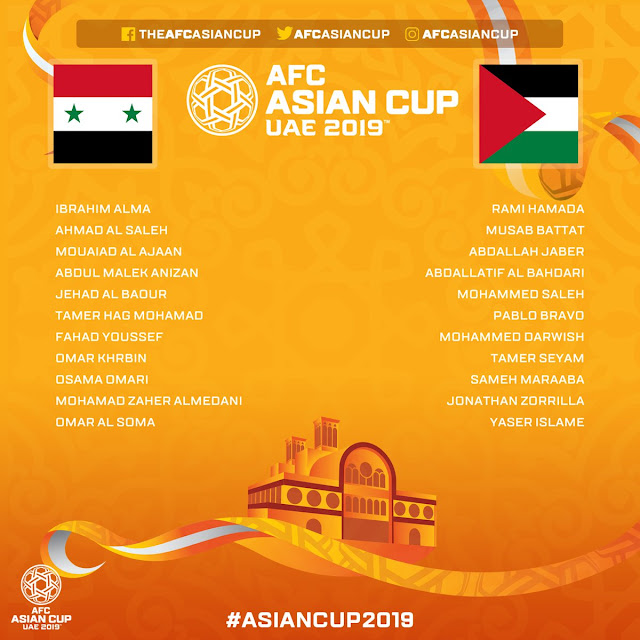 Recap: If the 2019 Asian Cup started with little more than a whimper, fans of both Palestine and Syria made sure to correct that. Atmosphere wise, the tournament started today in earnest alongside two huge upsets as India and Jordan beat the expectations of every fan and oddsmaker.

Palestine began nervously with Omar Kharbin almost putting away a flicked on header from Omar Kharbin. Syria would have another chance after a foul on Hamadi wasn't called, again the chance fell to Kharbin who saw his shot blocked off the line by Abdallah Jaber.

The rest of the half was pretty quiet with Rami Hamadi showing off his skills coming out of the box to stop Omar Al-Somah and also pulling off a save that Hamadi has come to make look routine.

At the end of the first half, possession was even (54% to 46% in favor of Syria). Syria had three shots and two corners to show for their efforts.

For all intents and purposes, Noureddine Ould Ali's plan worked to near perfection in the first half. The players also handled themselves well in a hostile environment as Syrian fans outnumbered Palestinians by a factor of five to one.

Palestine continued to sit back and their defensive posture frustrated the Qasioun Eagles through the first 22 minutes. Syria spurned a chance after substitute Yousef Kalfa could not connect with Al-Somah following good work to skip past Abdallah Jaber.

Ould Ali went to his bench at that point and produced an interesting substitution- Pablo Tamburrini made way for Alexis Norambuena. Deportes Melipilla's Swiss army knife took up position in the middle of the pitch, perhaps in the hopes that he could deliver a killer ball from a deeper area of the field.

Disaster struck with Mohammed Saleh receiving his second yellow card of the night. The sending off was the worst nightmare for Ould Ali whose reserve centre backs are set to be tested against holders Australia on Friday.

Shadi Shaban came on in place of Jonathan Cantillana with a quarter of an hour to play to counter the presence of Mohammed Osman. The Eredivisie player was finally brought into the game after the incessant chanting of his name by Syria's supporters.

Palestine saw out the rest of the match with very little fanfare despite playing with ten men for the final quarter of an hour.

Visibly upset Syrian fans bolted at the final whistle and those that stayed behind would not be too happy with the fact that their team did not salute them after a fantastic 90 minutes of non-stop support.

Palestine's fans on the other hand were on cloud nine as they partied the night away- celebrating a point most analyst deemed unlikely at the outset of the tournament.

Man of the Match: Abdelatif Bahdari. What a performance! He completely neutralized one of the most feared attackers in Asia. Omar Al-Somah could not breathe tonight and that was down to what the captain did for 90 minutes on his 61st outing with the national team.

What I liked: We are on the board! Fantastic spirit to earn the point- our first in Asian Cup history!

Jersey Watch: Jako's shirts made their debut and true to form they were extremely plain. A flag was the only distinguishing feature of the jersey but having suffered with the most ridiculous provider (Peak) for the better part of four years; this seems like a small step in the right direction.

What's Next: Palestine face Australia on Friday, January 11th in Dubai's Rashid Stadium. The holders suffered a shock 1-0 loss at the hands of Jordan earlier today.