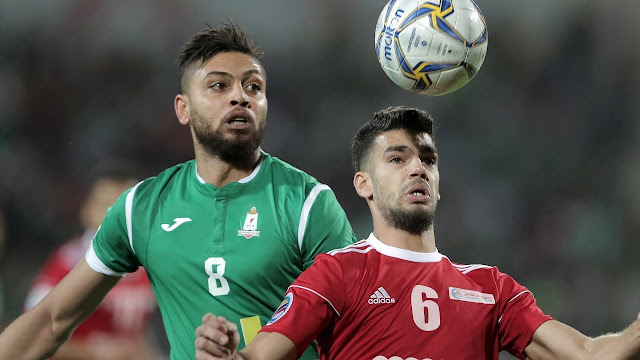 Heroic effort comes to an end

Hilal Al-Quds succumbed to a 2-0 loss to Wehdat on Tuesday evening sealing their exit from the 2019 AFC Cup. The capital side could have topped Group A with a win and advanced to the knockout stages but several factors prevented that scenario from coming to fruition.

From the start of the match, Hilal were on the back foot and needed several saves from goalkeeper Rami Hamadi to prevent Al-Wehdat from opening the scoring.

Luck was also not on the side of the Palestinians. Victor Bindia- Wehdat's Senegalese fullback was only shown a yellow after a reckless challenge on Owais Yasin. The tackle badly injured Yasin who was taken off after only 15 minutes of play.

The first half ended scoreless but the size of the task was beginning to feel overwhelming.

Al-Wehdat finally broke the deadlock in the second half off a set piece play. A whipped in free kick found Bahaa Faisal, whose header crashed off the post and deflected in. Ten minutes later, Hilal had a golden opportunity to get back into the game when a handball was whistled inside the box.

Mahmoud Awesat was tasked with the spot kick but his nerves got the better of him as he produced a timid effort that Abdullah Al-Fakhori saved with ease.

Fatigue began to set in after that demoralizing penalty kick miss. Hilal, like most WBPL sides, have a very thin squad- one that was stretched after a title race that went down to the wire and a rejigged schedule to accommodate postponed matches. Their fifth game in a fortnight had taken its toll and there was no coming back.

Rami Hamadi continued to make incredible saves, even after his error allowed Bahaa Faisal to score his second. Hilal even had a penalty shout waved away after a referee consultation; but it was simply not to be for the three time champions of the West Bank Premier League.

Despite the failure to qualify for the knockout stages. Hilal and Palestinian football can be proud of this season's AFC Cup campaign. It featured four wins- including two in the group stage- and a haul of eight points in the group that produced two West Zone semifinalists. Oday Dabbagh scored six goals in the competition- eclipsing Mahmoud Wadi as Palestine's leading scorer at an AFC Cup.

A gap still remains between league football in Palestine and league football in Jordan but that gap can be closed- if endemic problems are taken seriously and addressed. Here's hoping that the success of
Hilal Al-Quds can convince stakeholders to take the necessary steps.