Palestine set to return to action next month 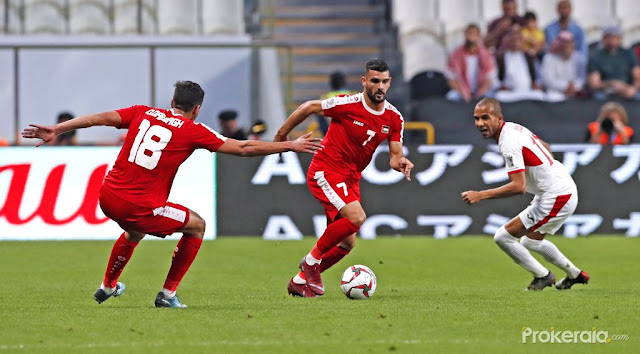 Palestine will return to the pitch after a five month hiatus in June.

The national team has not played a match- official or otherwise- since their 0-0 draw against Jordan on January 15th; a result that condemned them to an early group stage exit at the 2019 AFC Asian Cup.

The friendly was announced by the FFKR on their official Twitter feed last week with no official announcement being made by their Palestinian counterparts.


This will be the third meeting between the two sides in the last year. The two sides met in Bishkek in September of 2018 and played out a 1-1 draw and later met in Doha in December with Kyrgyzstan beating Palestine 2-1.

The PFA has been mysteriously silent regarding the future of the national team. It was widely expected that Noureddine Ould Ali would step down following the Asian Cup but he has remained in the role and will, in all likelihood, pick and manage a squad for this friendly.

Palestine are currently ranked 99th in the latest FIFA rankings but more importantly only 17th in Asia. In order to avoid being ranked in Pot 3 for the upcoming draw in July they'll need to garner a positive result in this friendly while hoping other friendly results go their way.

A half a dozen countries are vying to avoid the dreaded Pot 3 and the margin of difference is incredibly close. Only 10 ranking points separate India (18th) from Jordan (15th).

If Palestine manage to move up to at least 16th place, it will mark the first time they've been in Pot 2 for a World Cup qualifying draw.

Palestine was in the fourth and last pot for the 2002 draw and four years later they moved up to Pot 3 but had the misfortune of drawing Uzbekistan and Iraq in their group.

For the 2010 and 2014 editions the qualifying format changed and Palestine along with all but five nations were forced into a preliminary phase. Ranked 18th at the time of the draw they crashed out to 29th ranked Singapore after logistical difficulties beset their campaign. They managed to navigate past the first preliminary four years later but fell to Thailand in the second home-and-away series.

FIFA announced yesterday that expansion would not be put off until 2026- confirming that only 4.5 spots will be on offer for Asian teams. As a result, Palestine and several other Asian nations will be playing extremely important matches- under the label of friendlies- before qualifying even gets underway in September.