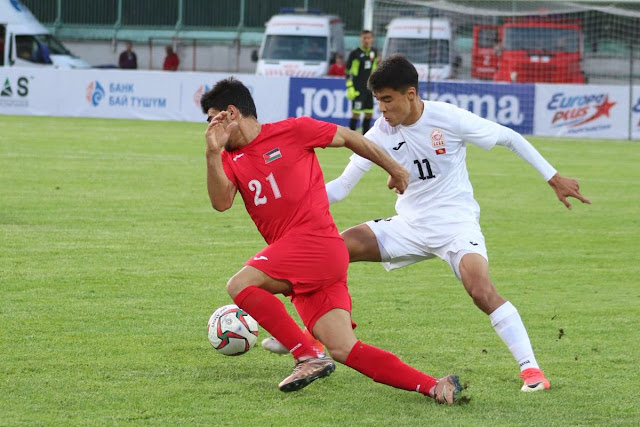 Recap: What is there left to say? If you have seen one Palestine match with Noureddine Ould Ali in charge then you've seen them all. Palestine started with a familiar shape 4-5-1, sat deep and was hesitant to commit numbers to the attack.

The only new name in the starting lineup was Hilal Al-Quds's Mohammed Abu Mayala who partnered Abdelatif Bahdari in defence. The captain was a late addition to the squad having arrived to Kyrgyzstan at 5:30 this morning.

The rest of the squad was set up in the usual fashion- Mohammed Darweesh anchored the midfield while two other midfielders floated around him with no concrete idea of what they were supposed to be doing. In attack, Islam Batran was back but having not played in 27 days the rust was evident his partner on the wings- Tamer Seyam- had his best game in a while and always seemed likely to create something.

Yashir Islame was given the unfortunate task of toiling on his own up front in the hopes he could get the ball 40 meters away from the opposition goal.

What was perhaps most frustrating is that despite the lack of tactical cohesion the formation still resulted in chances for the Palestinians. Unfortunately, those chances also exposed the limitations of trying to fit square pegs into round holes. Yashir Islame is simply not the kind of player you counterattack with- he can provide a team with fabulous hold up play, clever linking with other players in the attack and a presence in the box but he does not have the speed to torch the last defender.

Islame had the first chance of the game in the 17th minute; he did well to break and create a counterattacking chance. He then shimmied one defender but with another to beat- he elected to shoot (the wise choice given there was no one to support him) but his shot was saved.

Kyrgyzstan took the lead just after the half an hour mark through Tursunaly Rusmatov following a quick throw in after the initial corner kick. It was the type of attacking phase that a well drilled team practices over and over and one that directly exploited Palestine's tendency to sit too deep.

To their credit- Palestine responded immediately although tactically nothing changed. Tamer Seyam pinged a switching ball 70 yards to start an attack that ended with Sameh Maraba's shot being desperately parried away amidst calls for a penalty kick.

The two players combined again- with Islame holding up the ball way back in his own half and dishing out to Tamer Seyam who sprung Maraaba with a sumptuous ball only for the latter to waste the opportunity with an attempted chip of the goalkeeper.

In the 43rd minute a great cross from Abdallah Jaber found the head of Maraaba whose follow up was latched onto by Yashir Islame. The striker's shot was parried by the onrushing goalkeeper's feet and eventually cleared.

The best chance of the second half would fall to Palestine and again Seyam was the creator- his cross from the right richocheted off Batran and fell for the substitute Oday Dabbagh who could not steer his shot into the Kyrgyz goal.

Kyrgyzstan would have a chance of their own moments later as Mohammed Darweesh was caught out of possession in an interchange of play with Abdelatif Bahdari. Rami Hamadi's quick reactions prevented Murzaev from doubling the lead- at least temporarily.

The hosts would have their second- in a vert similar manner to their first. A corner kick was partially cleared and then played quickly back in and again the headed effort found its way into the net.

Although Hamadi was partially at fault it was a goal indicative of Palestine's shortcomings. The defensive line sits too deep and while the video is not clear enough to determine what happened- a bevy of bodies in front of the goalkeeper means your last resort could be unsighted and unable to position himself to make a save.

To the credit of the players- they continued to fight. Noureddine Ould Ali's reaction was to limit the damage- by withdrawing Yashir Islame and putting on Shadi Shaban.

A gorgeous free kick from Tamer Seyam started the fight back. There were opportunities galore but it was Seyam again who conjured up an equalizer- with another one of his free kicks pinging off the hand of a Kyrgyz defender.

A slew of players asked to take the penalty- but Bahdari waved them all away. The captain, in what might be his last game for the national team, blasted his effort straight down the middle allowing his teammates to take some joy from a game beset by internal sabotage from forces within.

What I liked: The spirit. The players are not at fault for what happened today, in fact their individual skills meant they could create chances in a system that inhibits chance creation.

What I didn't like: The defensive line was too deep (again) which put a ton of pressure on the midfielders and isolated the attackers. None of Palestine's chances came from the middle because Palestine could not get the ball there. Take a look at the screenshot above- There are nine players behind the ball to account for a mere four- FOUR- Kyrgyz players!

What it means: The FA dropped the ball. A win in a friendly in March or this window could have given the team a chance to leapfrog Jordan into Pot 2. Instead, they'll be in Pot 3. Jordan's 4-1 win over Indonesia rendered this a meaningless friendly (although judging by Ould Ali's reactions on the sidelines and his berating of the fourth official you would have thought something was on the line.)

Man of the Match: Tamer Seyam was a beast today- might have been his best game with the national team.

Records Set: Abdelatif Bahdari became the oldest player to play for Palestine and the oldest goalscorer in national team history (35 years, 3 months, 22 days). His 9th goal means only three players have scored more than him (Fahed Attal (14), Ashraf Nu'man (12), Jonathan (10)). He also becomes the most capped outfield player in national team history with 64 caps, 62 of which were as a starter- he needs to play at least five more games to overtake Ramzi Saleh.


What's Next: The World Cup qualification draw will take place in July with the first qualifier slated for September. Seeds are as follows: