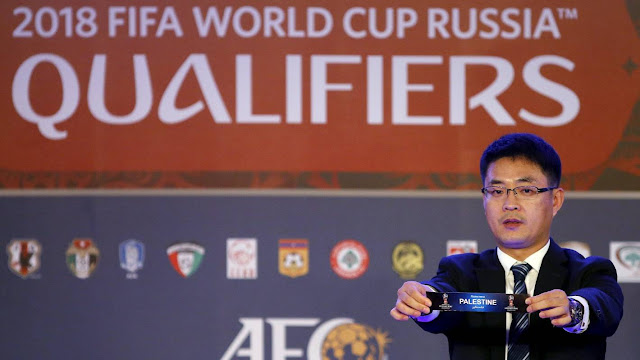 When a team falls short of expectations, fans tend to go looking for answers and excuses and are more often than not left ruing their luck or pointing to evidence of a wider conspiracy.

With Palestine destined for Pot 3 at next month's 2022 FIFA World Cup qualifying draw, Al-Fida'i will be hoping that lady luck smiles on them.

Qatar's inclusion in the qualifying tournament consigned Palestine to this fate as did a series of unfortunate events. Had Mahmoud Wadi's last gasp bicycle kick gone in against Jordan, had Lebanon not received more cautions than Vietnam at the Asian Cup, had Jordan beaten Vietnam on penalty kicks, had anyone of these events happened then Palestine could rest easy knowing that it would avoid at least one quality opponent in World Cup qualifying.

Instead Palestine is looking down a barrel and will be hoping luck is on their side for once.

The simple fact is draws have not been kind to Palestine. Most recently, they were placed in the Group of Death at the 2019 AFC Asian Cup. Four years earlier in Australia, they were put in a group that featured the 2011 Champions, the 2007 Champions, and a Jordanian side that came close to qualifying for the 2014 World Cup.

World Cup qualifying has also been a source of misery for Palestine. For the 2018 edition, Palestine- the Pot 3 team- got handed a group that featured the strongest teams from Pot 2, 4, and 5 alongside the most talented Emirati team in a generation- one that was fresh from grabbing third place at the 2015 AFC Asian Cup.

Travel to certain locations such as Dili, Timor Leste also proved challenging and while the team rebounded to qualify for the 2019 AFC Asian Cup with relative ease they still were handed a group with two hellish away matches. The away match in Maldives was played in stifling 80% humidity while Bhutan away presented the challenge of playing at extreme elevation.


So what does the ideal draw look like for Palestine?

Ideally, Al-Fida'i would avoid being grouped with teams that refuse to travel to Palestine. In this case, that would mean avoiding Iran and Saudi Arabia in Pot 1, Lebanon and Syria in Pot 2, and Kuwait (and possibly Yemen) in Pot 4.

That said, it's perhaps more important to avoid teams that Palestine has historically struggled against- this means avoiding Iraq. The Lions of Mesopotamia are the only team to beat Palestine in Palestine and on top of a historical advantage- they will now have a formidable home advantage for the first time in ages in World Cup qualifying.

In this case it might be worth giving up a home game to avoid Iraq- Playing Lebanon in Amman would present a far easier task.

In Pot 1, there are several paper tigers Palestine could deal with; chief amongst them, China, whom Palestine drew 1-1 last November. A stale UAE side on their fourth manager in the span of two years would also be an ideal opponent.

In Pot 2, Uzbekistan and Iraq standout as the cream of the crop and Palestine will need to avoid them in order to secure a manageable path to Round 3. Oman, Vietnam, and Kyrgyzstan are three teams at roughly the same level and all three would be beatable- especially at home.

Pot 4 represent two big banana skins in sides that suffered a drop in the rankings due to prolonged FIFA Suspensions. Kuwait is the team to avoid given Palestine's horrendous record against the Blues. Indonesia's rabid fans makes them a tricky proposition away from home. Other than that, Palestine will be hoping for ease of travel- trips to Hong Kong and Singapore are far easier than ones to Myanmar, Guam or Mongolia.