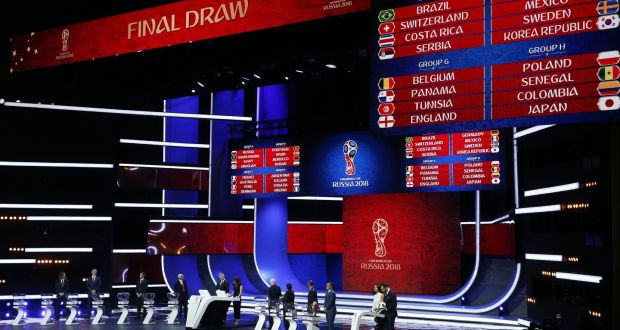 Teams from every corner of Asia will learn of their paths to the next World Cup this Wednesday when the draw for the Second Round of Asian World Cup qualifiers is held in Kuala Lumpur, Malaysia.

The draw is set for 5 PM local time and will be streamed on the AFC's YouTube Channel.

Here is a reminder of how the draw will be seeded.

For the second time in a row, Palestine are in Pot 3 having narrowly missed out on Pot 2 by virtue of their FIFA Ranking. The Palestinians can count themselves especially unlucky given the fact that Qatar has been included in this round of World Cup qualifying by virtue of the jointed nature of the qualification method that also counts towards qualifying for the 2023 Asian Cup.

There are several overarching scenarios that all the teams in the draw will be keeping an eye on. As with any draw, there are teams that will be ones to avoid in each pot.

Kuwait, who suffered a massive downturn following their FIFA suspension in 2016, are in Pot 4. Al-Azraq was a Pot 2 team last time around and will be more than capable of pushing for a place in Round Three.

For their part, Palestine are one of the lower ranked teams to avoid along with Thailand and Tajikistan in Pot 3 with recent results proving they are more than capable of beating higher ranked Asian teams.

In Pot 2, Uzbekistan and Iraq are veterans of the final round of qualification. Uzbekistan have been involved in every edition since the two group format was adopted for the 1998 World Cup. Iraq have participated in the last three final rounds and will be boosted by the ability to host matches this time around.

In Pot 1, teams will look to avoid the sides that successfully qualified for the last World Cup and perhaps Qatar as well. The reigning Asian Champion is a curious case- with World Cup qualification already wrapped up and elite competition secured in the form of the 2020 Copa America. Felix Sanchez may decide to use the qualifiers as a testing ground in order to further expand his pool of players.

Within the group of five teams that played in Russia 2018, Japan is the most settled team having seamlessly transitioned generations during the 2019 Asian Cup and 2019 Copa America.

Iran have a new manager at the helm but if their friendlies under Wilmots are anything to go by they haven't missed a beat.

Korea Republic seem more settled than the other two World Cup finalists- Australia and Saudi Arabia. The latter are still in search for a new manager.

For Palestine, or any Pot 3 team there is a 12.5% chance that they are grouped with Iraq or Uzbekistan in addition to an Asian Big Four.

In fact, there is an equal chance Palestine is grouped with China or UAE from Pot 1 and a team that isn't Uzbekistan or Iraq from Pot 2.

I ran 10 random draws, to simulate what a potential group would look like not only for Palestine but other teams in the field. 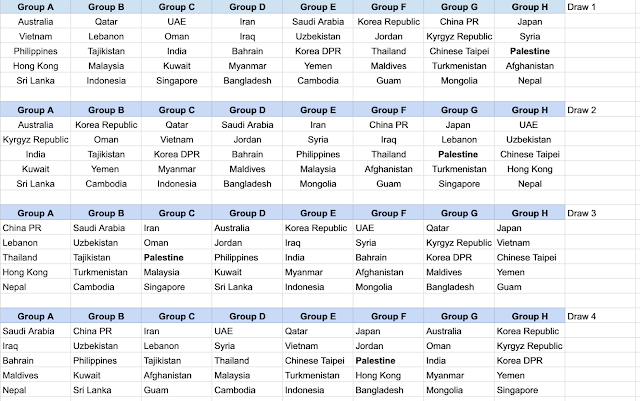 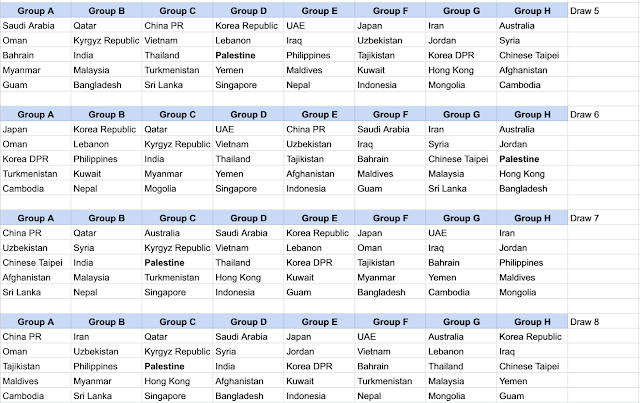 After all the draws, the numbers were proven to be true. One draw (Draw 10) produced a dream draw and another (Draw 9) produced a difficult one.

The other draws mostly featured Palestine being handed formidable, but not unbeatable, teams from Pot 2 and an Asian giant from Pot 1. Japan was drawn with Palestine on four separate occasions, Australia was the second most common opponent (twice). Iran, Korea Republic, Qatar, and UAE each came out of the hat just once.

In Pot 2, Palestine were placed alongside each of Kyrgyz Republic, Jordan, and Lebanon, and Oman twice. Syria and Iraq were the opponents on the other two occasions.

Palestine avoided Kuwait throughout the ten draws conducted- which is not a surprise considering the slim chances (12.5%- the same chances of drawing a Big Four and Uzbekistan/Iraq in the same group).

Although widely rumored, there has been no official word that Palestine would be kept apart from teams that have refused to travel there for fears of normalizing the Israeli occupation.

Saudi Arabia took such a stance during 2018 qualifying which resulted in a huge fallout (details on that story here, here, and here) and there are fears other teams could do the same.

Al-Ahed (LIB) and Al-Jaish (SYR) lobbied not to play Hilal Al-Quds in Palestine and the AFC acquiesced to their demands moving both of Palestine's home games and Al-Ahed's home game to a neutral location.

The AFC will most likely avoid making special dispensations before the draw. Although some countries with no official ties have travelled to Palestine before (UAE and Oman in the last qualifying cycle) there are no less than thirteen nations in Pots 1, 2, 4, and 5 that do not recognize Israel- making any effort to keep them away from Palestine's group especially difficult.

In the event Palestine lands one of the thirteen nations- the chances are that most will likely play in Palestine. In the event of a refusal, the AFC will most likely force both home and away matches to take place on a neutral ground in Asia- with Palestine most likely opting to host their match in Amman.