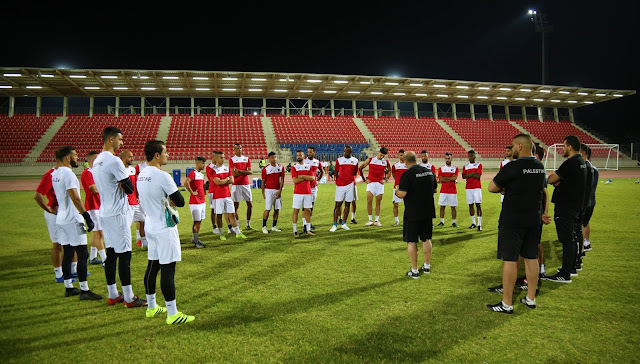 
Palestine kickoff their 9th participation at a West Asian Football Federation Championship in search of only their second win. Tuesday's encounter between Palestine and Yemen will pit two sides that have spent the past nine years on two very different paths.

Historically, both Yemen and Palestine- alongside basketball crazed Lebanon- have been the weaker sides of the Middle East. All three teams have started to make strides and with the WAFF Championship finally back- after a five year absence- there is an opportunity for all three teams to make a statement to the rest of the region.

The statistics are humbling however as the three whipping boys of the WAFF sub confederation have combined for a total of four wins. Palestine's lone win came against Lebanon in 2012, Yemen's lone win came against Palestine and 2010 and Lebanon waited 12 years to register their second win (over Oman) after beating Kyrgyzstan in the inaugural tournament.

For Palestine, the key to advancing to an improbable final is to collect three points from this game. Perhaps more importantly, Palestine need to get back into the win column as it's been eight games (five draws and three losses) since they last tasted victory.

Three points along with a convincing performance would help lift the feeling of doom and gloom that has preoccupied the fan base.

The WAFF squad includes some conspicuous absences, a few staples, and whole host of new names. To date, there has been no formal explanation as to Musab Al-Battat's exclusion from the side. Perhaps this was by design- to give Musa Farawi and Ahmed Qatmish as many minutes as possible or perhaps this is a reaction to Al-Battat signing with Shabab Al-Dhahrieh- a team in the second tier.

Rotations will need to be part and parcel of Noreddine Ould Ali's strategy here. All four centre backs should get at least one start- and a viable duo needs to be identified ahead of the crunch qualifier against Uzbekistan in September.

On the other side of the pitch, different attacking dynamics need to be tested. Rami Musalmeh being called up again isn't very inspiring and Mohammed Balah- scorer of a meagre five goals in the Omani league- is nothing but a poor man's Mahmoud Wadi. Raed Dahleh is an interesting addition but far from the finished product.

ِThe Yemeni FA had hired Jan Kocian before the Asian Cup but the Czech manager did not last in his post following a disastrous performance that resulted in three losses and ten goals conceded without reply.

Sami Al-Naash is now the man in charge but little has changed for the plucky Yemeni side who are still competitive despite years of war and a decimated local league.

Much like Palestine, Yemen will use the tournament to bleed in some youngsters but expect to see many familiar names in the side. Two of three goalkeepers from the Asian Cup are in the squad with Salem Al-Harsh now the presumptive starter after taking Saoud Al-Souwaidi's place in their final Asian Cup encounter vs. Yemen.

Defensively, Mohammed Ba Rowis will anchor the side and a quartet of Qatar based players Mudir Abd Rabo, Mohammed Fuad, Abdulaziz Gumaei, and Mohammed Boqshan are in the side and will be counted on to make life difficult for Group A opponents.

While the team's captain and lynchpin Alaa Al-Sassi isn't in the side- the promising youngster Ahmed Al-Sarori is- and will be relied to create chances for Al-Yemen As-saeed.

Play on the front foot

The last time these two teams met- Palestine huffed and puffed to a win. It was largely the result of a conservative lineup trotted out by then manager Abdel Nasser Barakat- who couldn't get enough of proactive play from a midfield triumverate of Shaban, Darweesh, and Yameen . A late winner by Yashir Islame was the start of a brilliant 2017 that saw Palestine run the table with seven wins that year.

It is of the upmost importance that Noureddine Ould Ali does not fall back on old habits. He was quoted by local press saying that the typical Palestinian player lacks belief and faith in his abilities but he was guilty of a lack of confidence during the Asian Cup.

In retrospect, Syria was there for the taking. We could have surprised Australia by going with a high press and exposing their poor play from the back (which would have been a more honourable way to lose), and finally we could have- and should have gone guns blazing from the first minute against Jordan.

The recent friendly against Kyrgyz Republic provided ample evidence of how much more effective Palestine could be when their defensive line is 20 yards further up the pitch.

There is no need to be cautious against Yemen. In fact, caution will only strengthen their belief and resolve. The Yemenis are grinders who are committed to a singular formula- stop the other team from scoring. The longer it remains scoreless the harder it will become to play against them.

An historic 2-1 win over Nepal is all this side has to show for their efforts over the last 10 games a run that includes 9 losses, 0 goals scored, and a whopping 22 goals allowed.