Lebanon attacked through their talisman with the intent to unbalance one of the youngest players on the pitch. Musa Farawi was up to the task as he faced down Hasan Maatouk more than once and found a way to neutralize one of the region's best attacking threats.

Any chance that did squirt through Palestine's defences was aptly dealt with Abdelatif Bahdari and Yaser Hamed who were not put under too much pressure in the game's opening stanza. With Oday Dabbagh in place of Mohammed Balah Palestine looked more dangerous when the ball was in the opposing half. Unfortunately for the front three, Palestine's midfield was bereft of any creativity.  Mohammed Darweesh destroyed attacks in front of the defence and Mohammed Rashid pressured the ball carrier leaving Shadi Shaban in a weirdly undefined role.

The pace of the second half was picked up by Lebanon and it seemed that the policy of rest and rotation employed by Ciobotariu would pay dividends. Palestine picked up a succession of yellow cards as reckless tackles became more commonplace.

Try as they might, Lebanon could not break through the Palestinians rearguard as they were unable to create anything in the middle of the pitch. Too often, the Cedars resorted to crosses into the box which were dealt with comfortably by the towering centreback duo of Bahdari and Hamed.

Palestine survived their rough patch in the second half and reasserted their defensive dominance, using that as a platform to create a pair of chances that could have won the game. Yaser Hamed Mayor saw his chance saved by desperate Mahdi Khalil in the 86th minute. Moments later, Palestine broke and Yameen's awareness found an open Dabbagh who put his shot straight at the goalkeeper.

Too often though, caution eroded Palestine's best efforts. In one instance, Rami Hamadi went route one from his- forcing Mahdi Khalil to come out of his box and clear the danger from the onrushing Dabbagh at the top of his box. The clearance, fell to a Palestinian player but there was nobody else in support and a golden chance went by the wayside.

Lebanon also had their chances to win late in the second half and it was one of the revelations of the tournament who denied them their two best chances. Yaser Hamed Mayor atoned for his handball against Iraq by making a great slide tackle effort to deny Rabih Ataya a shot from close range.

What I liked: Well, it's another clean sheet and if Palestine can hang their hat on anything it's that they now know who will anchor their defence against Uzbekistan. Yaser Hamed Mayor has not been perfect by any means and at 21 years of age there are still certain things he can stand to improve BUT it's been a net positive for him over the last three games. A goal and two clean sheets will give him confidence- people will want to rake him over the coals for his handball against Iraq but he was not entirely at fault for that.

Palestine, barring injury to another centreback, is going to be very hard to beat during World Cup qualifiers. That said, the overly defensive approach employed by Ould Ali might also bring about their downfall.

What I didn't like: The moment Palestine lost to Iraq, the pressure to get results in the tournament was relieved. Iraq will win its last two games and progress to the final- leaving the rest of the teams in the group to battle it out for second place in a meaningless competition. What is the point of including 23 players in a squad if only 13 will get a chance to start a game and a mere 15 will ever make it to the pitch? Perhaps the players "are not good enough" but that still does not excuse trying to jam square pegs into round holes.

Mohammed Yameen, Mohammed Darweesh, Shadi Shaban, and Mohammed Rashid were all on the field at the same time at one point tonight while Palestine were trying to SCORE. What is the point of that? Shadi Shaban- delirious with exhaustion- was withdrawn for another defensive midfielder: Haitham Khairallah.

Yes, the presence of not a single attacking midfielder stymied Lebanon but you don't need to do that against a team that is at your level. When Palestine mustered enough courage to attack, you could see that Lebanon had vulnerabilities that could be exploited. An additional attacker should have been on the pitch from the beginning of the game as a statement of intent.

The final substitution? Rami Musalmeh for Islam Batran. In any other national team, Muslameh would have been blasted into the core of the sun for dribbling and losing the ball in his own box with the game on the line in the last ten minutes (especially when you consider that his foolishness led to Iraq winning a penalty).

There is no point to playing Rami Musalmeh. We know what we knew in 2014. He cannot make a difference at international level. This does not mean Raed Dahleh, Amir Qitawi, or Hamada Jaabari can but what would it cost Ould Ali to spare them 5-10 minutes of playing time?

Iraq on the brink: With wins over Palestine and Lebanon, Iraq only need two points in their last two games to advance to the final. The scoreless draw favored neither side and second place will most likely be decided by whomever can score more goals in their final group game.

Jersey Watch: These jerseys from Joma are ridiculously plain and are made hideous by the local supplier who provides the number plates that fall off after one wash. Also, despite having won some famous games in red- I can never get over Palestine wearing the color. A reminder of what Palestine's best looking jersey looked like (2002 WAFF Championship) 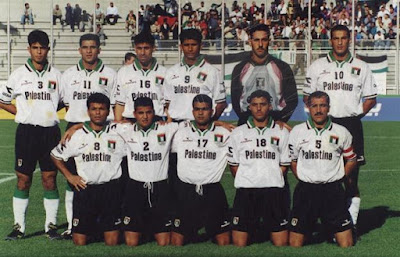 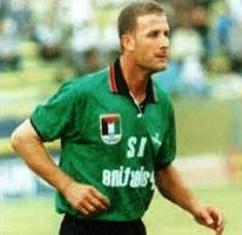 Jaber reaches milestone: Abdallah Jaber became the quickest (4 years, three months) and youngest player (26) to reach 50 national team caps. Incredibly he has started every single game he has played in and since making his debut in May 2014 and has only missed eight games since making his debut.

Also on the brink of history is Abdelatif Bahdari who now sits on 67 national team caps and will tie Ramzi Saleh as the most capped player in Palestine's history should he play against Syria.

What's Next: Lebanon and Yemen face off on the final match day (August 8th). Palestine are back in action against Syria on August 11th (19:30 Jersualem) and will know exactly what they need to leapfrog Lebanon in the standings.