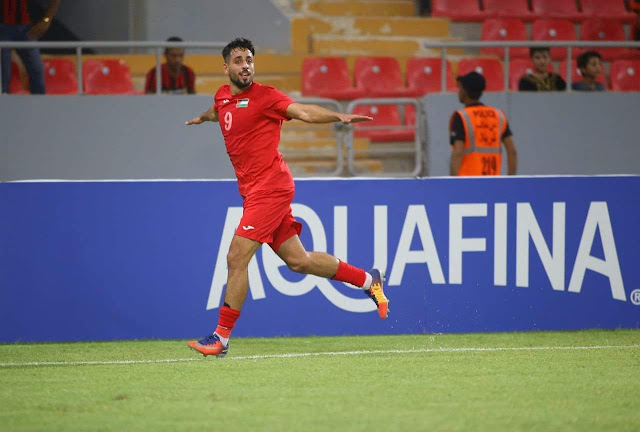 
Recap: Palestine emerged victorious in a sloppy affair between two very similar teams. It was only Palestine's fourth comeback victory since rejoining FIFA in 1998 and only the third time they've managed to win after conceding the first goal in 169 matches.

Palestine were without custodian Rami Hamadi after an injury during warmups forced him to retire. In his place, Toufic Ali was nothing more than a spectator- making no meaningful interventions or saves whilst conceding three goals.

Syria's first goal came after just three minutes of play- a low cross played in from the left evaded both CBs, and with the goalkeepers glued to his line all Khaled Mubayed had to do was finish. In fact, the Syria midfielder had so much time he took a touch and passed the ball into the net. It was a goal that didn't reflect well on many members of the team and one that showed that playing deep does not mean your defence will be impenetrable.

Palestine sprung to life shortly after that and Syria failed to create anything of note- asides from nearly capitalizing on a spilled cross from Toufic Ali.

For their part, Palestine tortured Syria down the right flank with the speed and trickery of Oday Dabbagh. Palestine nearly equalized in the 32nd minute only for Ibrahim Alma to save Yaser Hamed's headed effort. Palestine would be rewarded for their proactive play at the stroke of halftime. Ibrahim Alma spilled a ball served in from a corner and Islam Batran was there to pounce on his mistake.

Al-Fida'i took control of the game in the opening 15 minutes of the second half. Palestine's attack was given a boost with the removal of Mohammed Balah and the inclusion of Mahmoud Abu Warda. A penalty was won in the 60th minute by Abdallah Jaber and a minute later Oday Dabbagh stole the ball from a dawdling defender to score his second- and Palestine's third of the night.

The game should have peetred out from there but Firas Al-Khatib emerged from the bench to breathe life into Syria.

Syria won a penalty after a tackle from Yaser Hamed Mayor was adjuged to have been a foul. El-Khatib dutifuly converted. A blown offsides call allowed El-Khatib to sneak in and put in a cross  forMardik Mardikian to Rick away.

Credit to Palestine, they continued to plug away and we're rewarded with a goal at the death. Mohammed Yameen slotted him after Dabbagh had been denied at close range to secure three points in an uncharestically sloppy game.

What it Means: Palestine finish second in the group and will miss out on a place in the finals to Iraq who saw off Yemen I'm a 2-1 victory.

What I liked: Palestine won a game in spite of many things not going their way. Palestine doesn't have a track record of being able to class back from deficits and this game might imbibe belief in the side ahead of what is sure to be a very difficult World Cup qualifying campaign.

Younger players were able to get experience and for the most part many of them rose rose to the occasion. This was Yaser Hamed's worst game with the national team but he needed to have it and he needs learn from it. That said, he is a veritable never of the national team now as are Farawi, Yameen, Abu Warda, Dabbagh, and Batran- all of whom were not part of the Asian Cup squad.

What I didn't like: For the second game in a row, Palestine went with three defensively minded midfielders. This was most definitely a game that an attacking midfielder could have run riot in. Mohammed Yameen, who is more of a box-to-box player, had a field day when he came on. There were also two other personnel decisions that proved to be the wrong choice: Mohammed Balah was a ghost in the first half and Palestine looked dangerous after his withdrawal.

In between the posts, at some point we must bring the Toufic Ali experiment to a close. At 1.95 m he looks like a goalkeeper but is well short of the standard. Just look at his positioning on all the goals that were conceded, he was stuck to his line reacting to proceedings instead of proactively stopping them. Rami Hamadi gets a fair bit of stick for being "too short" but this game should show everyone how viable he is to the national team. Moreover, Amr Kaddoura should be the second choice goalkeeper and anyone who argues otherwise knows very little about the position and the sport.

What's Next: Palestine will play host to Uzbekistan in their first World Cup qualifier on September 5th.