Progress and stagnation. Another season of professional football kicks off 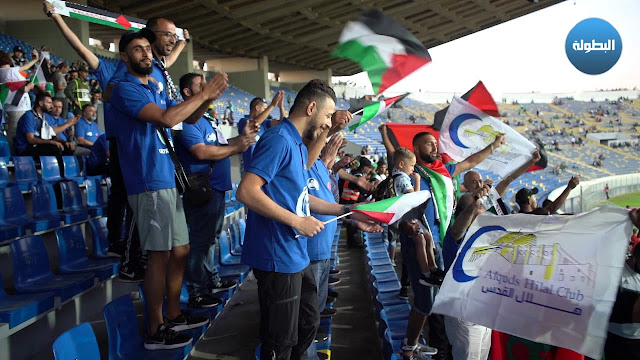 Ten years ago marked a turning point in Palestinian football as the first fully fledged professional league was launched in the West Bank. It was a change in more ways than one. The Second Intifada had halted all domestic football activity and the national team's steady progress since 1998 had halted.

If there was one area were football flourished it was Gaza, the region benefited from its exposure to the advanced Egyptian sports framework during the interwar period and had clubs capable of harnessing talent. The geography and density of the strip meant it was easier to organize competitive tournaments as the the longest journey in the Strip lasts no more than one hour.

The launch of the West Bank Premier League was a bold project in more ways than one. To launch in the West Bank where travel is more difficult and where infrastructure was non-existent before 2008 was a gamble.

Into a vacuum stepped Jibril Rajoub a political operator in search for a platform. Under his tenure, consistent league football was launched and sustained- that league is now entering its 10th year.

There were also a stadium construction boom. The Faisal Al-Husseini Stadium was joined by a Stadium in Dora and Al-Bireh with artificial pitches being laid in Nablus and Hebron in older venues. The dilapidated Jericho stadium was also renovated and returned to working order

As all this took place, football in Gaza fell into disrepair with wars in 2008 and 2012 further setting the sport back in the heartland of Palestinian football. Things would improve however and consistent league play would return with a champion being crowned every year since 2011.

There was even the small matter of the Palestine Cup which featured the Cup champions of the West Bank and Gaza Strip facing off against each other for the right to be called champion of Palestine. The cancellation of the second leg of that match has made national news headlines this week with Al-Jazeera and Deadspin both reporting on the event. For the first time in 2016 there will be no Palestine Cup Champion.

This is of course not the first time the competition made headlines for the wrong reasons. In 2016, it was the backdrop in the draconian entrapment of Mahmoud Wadi

A veneer of respectability

The punitive punishments doled out by the Israeli occupation in tandem with herculean efforts of the players has provided the PFA with a comfortable crutch on which to lean on.

Should they fail to deliver on something, the occupation can be blamed. If a team manages to punch above its weight,  it can wrap itself in the flag and claim credit as the purveyors of the game in Palestine.

The Palestine Cup has always been a good example of the PFA's incompetence at play. Despite teams in the West Bank having access to more funding and ostensibly better players, Gaza teams almost always punched their weight. Shabab Rafah won the title in 2016 and Khadamat Rafah had a first leg over Merkaz Balata lead before the cancellation of this year's addition.

Organizationally, the Palestine Cup did not even pit the Cup Champions against each other. For the first two editions the winner of the Gaza League was invited to represent the coastal clubs.

In fact, the state of pitches in the West Bank have long been the topic of discussion as many have pitches that are over a decade old and are in worse condition that many Sunday league pitches a reader of this site might play on.

It is nothing short of a miracle that the Faisal Al-Husseini stadium was allowed to host UAE and Oman in 2015 and 2017 respectively. Any player who has played on that torn up rubber pelleted pitch should feel lucky to have escaped serious injury.

The pitch only reflects one aspect of the many problems with the stadium boom. Many of these stadiums were not well constructed- with some deemed complete despite only having one L-shaped stand (this is the case in Al-Bireh, Dura, and Jericho). Moreover, very little thought was put into where these stadiums were built.

The PFA insisted on building the national stadium in Al-Ram, a suburb of Jerusalem in order to send a political message. Unfortunately for the PFA, match reports just list Al-Ram instead of Jerusalem as the site of the match. As PR was never the forte of the organization, even Arabic language media throughout the Middle East will often incorrectly place the national stadium in Ramallah.

Instead of growing the sport, the corruption of the PFA has inhibited its growth. They have stopped individual clubs from negotiating independent sponsorships, blocked the creation of a Players Union, have failed to stop the epidemic of unpaid wages, and have failed to create a viable pipeline of selling talent to foreign leagues.

Players accomplishing the near impossible

With all the problems mentioned above it would not be a surprise to see football falter in the country. The players have instead taken what little opportunity they have with two hands. A sliding doors moment came in 2014- Palestine's unexpected Asian Cup qualification greased the wheels and the PFA has since started to provide the bare minimum (such as training gear for the national teams).

Since then, Palestinian clubs have put together respectable campaigns in the AFC Cup, the U23 team strutted their stuff at a the U23 Championships in 2018 and two Asian Games, the senior team qualified for another Asian Cup and sustained an average ranking of above 100 for the last two years. They even were ranked above Israel for five months between 2017 and 2018.

Hilal Al-Quds were so good in 2018/19 that they managed to increase Palestine's slot allocation for the AFC Cup to 1.5 slots.

The capital city side are also participating in the Arab Club Championship after the UAFA tried to get Palestine to enter an All-Star team in 2018.

Hilal preformed admirably- losing 1-0 courtesy of a dubious penalty in the first leg of their encounter against Moroccan giants Raja Casablanca.

This is where the narrative gets lost. Almost every international correspondent commissioned to write a story about the team will talk to Jibril Rajoub or one of his lackeys. There will always be a concerted effort to paint 2008 and Rajoub's ascension to the PFA Presidency as some sort of inflection point.

There was however an inflection point under the Rajoub- Palestine recorded their worst ever loss. A 7-0 pummeling at the hands of Iran in October 2011.

The real story of Palestinian Football and its accomplishments lay with the players and a handful of coaches and not with the corrupt governing body in the country. As another season kicks off, it is paramount that the true guardians of the game receive support and that those in power are pushed to do better or exit the playing field.