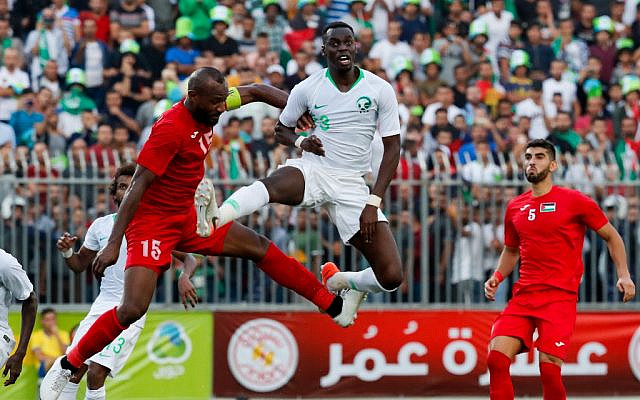 Four points out of six. On paper that point total from the two top teams in the group is a real coup for Al-Fidai. Had that been on offer before the start of qualifying in September most involved with the national team would have gladly taken that.

The only factor that Palestine had not accounted for was dropping all three points in Singapore on Match Day 2. This incident is what complicates the calculus for the Palestinians going forward.

There were many things that led to the Singapore loss. Playing at the the Jalan Besar stadium as opposed to the natural turf of the National Stadium played an important role as did fielding an unchanged team despite 90 tough minutes against Uzbekistan and two days of travel.

Three matches in however, Palestine are still very much alive and the good news is that qualifying is still in their own hands.

16 is the Magic Number

Three games in Palestine are on four points and they will need to up their points per game clip if they are to have any hope of qualifying.

That means a maximum nine points out of nine against Singapore and Yemen is absolutely necessary. The more goals Palestine can score in those games the better their campaign will be for it. Goal difference, as opposed to head-to-head record, is the first tiebreaker, followed by goals scored.

A theoretical nine point haul would get Palestine up to 13 points meaning a win, on the road, in Tashkent (November 19th) or Jeddah (June 4th) is absolutely necessary.

Why 16? Well, this number is mostly based on what transpired four years ago. The only caveat being that with Qatar involved at this stage but not progressing to Round 3 there will be an extra slot available for the best second place team. Also keep in mind that runners up had six points docked from their total as results agains the fifth place team were stricken from the record (Iraq were in a four-team group). A 16 point haul combined with a decent goal difference should be just enough for the second place team in the group to advance.

Singapore was not supposed to take points off Palestine following the latter's victory over Uzbekistan. Yemen for their part were supposed to be steamrolled by Renard's Saudi Arabia but found a way to breach their defences twice en route to a 2-2 win.

Any point that be secured by the bottom two against the top three will go a long way in determining who will win the group and if the second place team will be good enough to advance.

Let's assume Singapore and Yemen fail to spoil the party.

As it stands, any simulation that sees Yemen and Singapore cede all the points to Palestine, Saudi Arabia, and Uzbekistan will mean the group will be decided in games that directly involve those three sides.

Scenario 1: No winners between the big 3

Palestine can also win the group on 17 points with the following results.

Uzbekistan and Saudi would finish on 14 points each- a result that will most likely see them fail to advance to Round 3. If Uzbekistan win in Saudi Arabia on the last match day, Palestine would need to have a superior goal difference to win the group.

Palestine could have a solid grip on second place should they collect their away win Jeddah or Tashkent.

If Saudi Arabia sweep the table they would have 20 points, Palestine would be on 16 and Uzbekistan would have 12. The order of the teams would be the same should Palestine lose in Tashkent but win in Jeddah (17-16-15).

If Uzbekistan win all of their remaining games they would top the group on 21 points, Palestine would finish on 16 (with a win in Jeddah), and Saudi Arabia would be left in third place on 11 points.

The final standings would be a little closer should Palestine beat Uzbekistan but lose to Saudi Arabia (18-16-14).

In both these scenarios, Palestine could fail to win against the group favourites- picking up a solitary draw instead- and finish in second place on 14 points. A point total that would probably be too little to advance as one of the best second place teams.

Football-Rankings.info has Palestine's chances taking a hit as a result of their draw against Saudi Arabia with their chances at advancing to Round 3 falling from 32% to 14%. Uzbekistan are the only team in the group to have recorded a win on the road- perhaps suggesting that more than a few banana skins lie in wait for the favourites.

If Palestine can win in Bahrain against Yemen on November 14th then their chances could be in line for a boost. As outlined in the previous section, if Saudi Arabia or Uzbekistan collect less than three points against each other then a path for Palestine opens up.

Palestine still controls its own destiny and provided they take care of business should still be in the reckoning until the final two match days in June.

Palestine have already doubled the amount of points they garnered against the top two teams in 2018 qualifying. Now the goal is to g