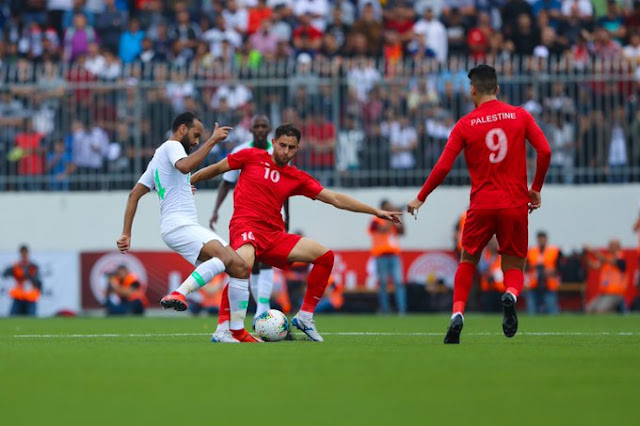 Recap: In front of a sell out crowd and a cooling autumn rain Palestine came out ready to extinguish the hype surrounding Herve Renard and this young Saudi side. A golden chance was served up to Saleh Chihadeh by Nazmi Albadawi inside the first ten minutes of the game, only for the FC Thun man to shoot straight at Mohammed Al-Owais.

Saudi Arabia, as expected, had the majority of possession and directed almost all the action down Palestine's right flank. That was the source of Saudi Arabia's first, and arguably best, chance of the game. Abdelatif Bahdari's poor clearance found the feet of the diminutive Yehya Al-Shehri whose pile driver was somehow parried by the superlative Rami Hamadi.

Palestine would absorb the punch expertly daring the Saudis to come forward all the while booting and heading their hopeless crosses into the Jerusalem clouds.

There were more chances in the first half to be had. Saleh Chihadeh met a low Musab Al-Battat cross but his shot was too high. Towards the tail end of the first half Nazmi Albadawi again teed up Saleh Chihadeh who could not quite contort his body into a correct heading motion. To his horror, the flag stayed down (despite there being a hint of offside) and his shot flashed wide of the post.

For all his profligacy in front of goal, the striker exhibited great spirit he was full of running and hustle and while it was not a surprise to see him hauled off. It was a surprise to see Khaled Salem come on. The striker knew he had failed in his mission, especially when he wasted good interplay and a nice through ball from Islam Batran inside the box.

The game became stretched in the final quarter of an hour with Saudi Arabia controlling more and more possession. That said, they really could not create a chance capable of troubling Rami Hamadi. Palestine would be the team with the best chances to grab a late winner.

In the 83rd minute, the two substitute rekindled a club connection with an exquisite ball being played from the right flank by Mahmoud Abu Warda into the path of Khaled Salem. The Shabab Al-Khaleel man could not settle the ball nor could he shoot on target. Five minutes later, Tamer Seyam would fail to pull the trigger from outside the box with the ball falling to a lurking Nazmi Albadawi whose shot didn't have the requisite power.

In the end, both teams had to settle for a point. With the guests perhaps a little happier than the hosts with the final result.

What I liked: I cannot fault the effort or spirit exhibited by the players today. Sometimes you need luck to smile on you- especially when certain factors are not in your favor. It did not help that Mohammed Darweesh was suspended and although their replacements were more than adequate it would have been nice to call on the services of Mahmoud Wadi and Oday Dabbagh.

The Crowd: Fantastic job of showing up to the game early. When the PFA put its mind to it, it can (by outsourcing to Jawwal) get a crowd large enough to fill the Faisal Al-Husseini and then some. The crowd did fall silent toward the end but you are not going to build a supporter culture overnight. Palestine does not play at home until 2020 and their assistance will be needed against Singapore in March to collect a crucial six points.

What I didn't like: I had said in my preview of this game that it might just come down to both managers being able to make the right substitution. Renard edged Ould Ali in that regard but it was obvious from the first kick of the game that the opposition is not your father's Saudi Arabia. There was nothing scary about them from a technical standpoint.

There is nothing Ould Ali can do nor should he blamed for Chihadeh's profligacy in front of goal. That said, Palestine had a bevy of set piece opportunities and every single one was predictable. Bahdari was the target on the far post or in the mixer. While the captain is great on set pieces- it is not a mystery to most teams what Palestine will try and do when given a corner or free kick. Predictability is the easiest factor to defend against and I would have liked to see a set piece that tried something different or used Bahdari as a decoy.

I do not believe that the coaching staff has confidence in the ability of the Palestinian player- even in those that are so clearly products of academies outside of Palestine.  I get the appeal of Khaled Salem and so did Jamal Mahmoud and Ahmed El-Hassan and Abdel Nasser Barakat. He has the physical tools but he lacks the rest. A player who gets subbed on with 15 minutes to go needs to run like his hair is on fire- he did not do that but did find the time to complain about quality of service. Then when he did get his big chance he fluffed his lines showing his absolute lack of technique.

To make matters worse one of Palestine's best marksmen was there on the bench ready, willing, and able. Yashir Islame has 7 goals in 18 games (15 starts) Khaled Salem has 3 in 30 (13 starts). Khaled Salem has never scored a goal in a big time game- he scored a penalty in a 10-0 rout of Bhutan. He scored in friendlies against Nepal and Bahrain and in some unofficial games. Yashir has scored pivotal goals in key qualifying games. The decision as to whom to play should be clear.

The moment this decision was made was the moment it became clear to all informed observers of this team that we would not score.

What it Means: Palestine are still alive. In the humble opinion of this writer, 16 points is the magic number to advance (either as group winners of best runners up). Meaning Palestine, currently on four points must collect maximum points from Yemen, defeat Singapore at home and find a way to beat either Uzbekistan or Saudi Arabia away.

Elsewhere in Group D: Singapore battled back from an early Odil Akhmedov goal and headed to the dressing room with another upset on its mind. Enter Eldor Shomudorov- who put the Uzbeks ahead in the 51st minute and iced the game in injury time to send Uzbeksitan top of the group.

What's Next: Palestine face off against Yemen on neutral territory (Bahrain) on November 14th before jetting off to Central Asia to face Uzbekistan five days later.