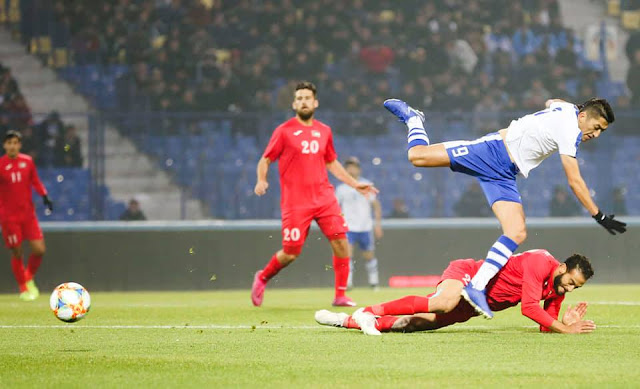 
Recap: In a must win game, Noureddine Ould Ali had no new ideas and although his lineup included four changes from the Yemen- it was more of the same. The only difference is that Palestine saw less of the ball and as a result were made to deal with pressure from the Uzbek side. As Al-Fida'i dropped deeper and deeper there was an impending sense of doom.

That premonition would become reality in the 14th minute with Palestine failing to press Uzbekistan's wide men and thus inviting the service for FC Rostov's Eldor Shomurodov. The team had dodged that same bullet only seconds earlier and failed to heed warning.

Badly in need of a goal, Palestine pushed their full backs up but the tactical confusion was clear for all to see. Palestine were rudderless and every time they lost the ball in Uzbekistan's half there was swift counter attack.

If not for multiple interventions from Rami Hamadi- Palestine would have been further adrift at halftime.

While a small window for the miraculous comeback remained open it was firmly shut in the 56th minute. Palestine were again caught defending too deep whilst neglecting to press the ball carrier. In a carbon copy of the first goal- service came in from the left side Eldor Shomrudov won his 50-50 challenge with Yaser Hamed and slotted home for his second goal with ease.

Palestine's substitutions in the second half did not really change the shape or approach of the team. Saleh Chihadeh labored for scraps on his own up top. Yashir Islame who is not, has never been, and will never be a winger was shunted onto the right wing- before being mercifully withdrawn for Mahmoud Wadi.

Nothing about how Palestine were set up could have generated a goal. Successful teams play in tight triangles. The only type of triangle in Ould Ali's system is a Bermuda triangle that saps all creativity from any player that might be deployed in it.

Palestine's best chance of the game came with five minutes to play. Mohammed Darweesh's long range shot was nearly deflected into the net only for Suyonov to come up with his only real save of the game (he caught another long ranger from Darweesh in the first half).

The ensuing corner kick saw appeals for a handball waived away.

A crushing indictment of Ould Ali's tactics was served up in injury time as the Uzbeks toyed with Palestine 25 meters from goal. A sustained period of over two minutes that did not end in a goal thanks to the Herculean efforts of Palestine's exhausted players who have been thanklessly chasing the ball and opponents in every single game of Ould Ali's discombobulated tenure.

What I liked: In any other team, the wheels would have come off already. Despite the insistence on sticking with an inept manager the team has not quit. They have implemented Ould Ali's ideas with unwavering commitment. The shortcomings of that system are not a byproduct of the ability of any one player.

What I didn't like: A must win game generated ZERO shots from inside the box. Suyonov had one real save to make and touched- not saved- touched the ball four times.

Ould Ali has one very simple tactical plan. A deep 4-2-3-1 with 10 men behind the ball. When the team needs a goal he keeps the same shape and plugs in different players into the same position (Yashir Islame played as a winger today).

To attack, Ould Ali sends numbers forward then hopes a long ball falls fortuitously to the feet of an attacker. The backline remains planted miles away from the rest of the team. This of course leaves the team open for counter attacks as the ball is advanced between the opponent's third and Palestine's third with acres of space and a numerical advantage.

Palestine have failed to score in 13 of the 27 games Ould Ali has been at the helm. In the 14 matches they have found the back of the net they have only scored 22 times.

Qualification Chances: You can find a summary of Palestine's qualification hopes here. Things are not officially over but they might as well be. Palestine are bottom of Group D. They have scored the fewest goals and they have the fewest points. If things don't turn quickly Palestine might need to play a home-and-away playoff just to advance to the standalone Asian Cup Qualifying tournament.

Palestine's players deserved better than having their World Cup dream extinguished three full years before the tournament started. The hubris and arrogance of Jibril Rajoub saddled them with a manager that was out of his depth and cost them and the fans the chance to make some memories at the Asian Cup or advance to the latter stages of World Cup qualifying.

Jibril Rajoub and anyone who supports him is an enemy of sport and athletes in Palestine.