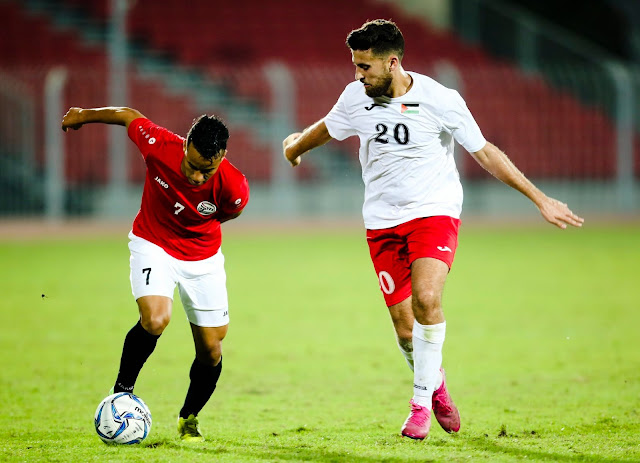 Recap: Palestine's hopes of qualifying- or at least furthering their journey- to the World Cup finals are in tatters. There was always an element of Jekyll and Hyde to this iteration of the Palestine national team. Capable of making fans dream one game, only to completely crush those hopes in the next.

Palestine's shape and lineup weren't particularly surprising. Rami Hamadi sat out with injury and Tamer Seyam was unavailable due to suspension. Noureddine Ould Ali trotted out a 4-2-3-1 with plenty of experience while handing a chance to Mahmoud Abu Warda on the right wing after he impressed in a series of cameos.

The post mortem might blame the card happy Jordanian referee or the naivety of Abu Warda in jumping into a challenge eight minutes after getting booked. It must be said, that while these were important elements- they do not tell the whole story of the game.

Palestine were discombobulated for the first 30 minutes of this match. Neither Yemen nor Palestine created a clear cut chance; it was as even as it gets. Yemen- who struggle to maintain possession had 53% of it- over double what they averaged over their first three games.

Before the sending off Palestine were lobbing balls from midfield into the box. It was ugly and unimaginative and above all- ineffective.

The red card did spark Palestine into action and they took the initiative in the second half. Unfortunately for all involved, a killer mistake led to Yemen's goal. Yaser Hamed who might have been used to playing with the more agile and active Rami Hamadi played a ball blindly to Toufic Ali. It was ill advised and ultimately catastrophic. Omar Al-Dahi scored the easiest of the five goals Yemen have scored thus far in the campaign nipping in behind to slot past a helpless Toufic Ali.

Palestine had chances to equalize but try as they might nothing was landing on target. Islam Batran, Saleh Chihadeh, and Mahmoud Wadi all came close. The latter two will be haunted as their reputations internationally will earn them no reprieve for their profligacy with the national team from a frustrated fan base.

Palestine's last roll of the dice was to put on Khaled Salem who promptly wasted a chance- heading comically wide of goal from ten yards out to seal Palestine's sorry fate.

What I liked: I think the red card spurned the players into action. That energy was not harnessed effectively enough to ensure a result. We must say this and say it clearly: We deserved to lose today.

Yes, the pitch was bad.
Yes, the referee was card happy.
Yes, some players were injured.
Yes, we played with 10 men for most of the game.

We had a flawed game plan that failed against Singapore (we also deserved to lose that match!) and we trotted it out against Yemen. Credit to the Yemenis for a spirited performance and for a coaching staff that are master alchemists- putting together a team

What I didn't like: The game plan. What on earth makes anybody think that Yemen can't clear a ball played to Wadi from 50 meters away? That is down right insulting the opponent and an utter misuse of the players we have at our disposal. If we cannot keep the ball against Yemen and involve our fullbacks in the build up of dangerous attacks then we simply will never see it.

If Mahmoud Wadi and Saleh Chihadeh can score in Egypt and Switzerland then there must be a way to harness their ability in a formation that complements their ability. If not, well- there's always Yashir Islame.

As the saying goes:  failure to prepare is preparation to fail.

Qualifying Scenarios: It is do-or-die for Palestine from here on out. They will need to win all of their remaining four games to stand a realistic chance of qualifying for the Third Round. There are other scenarios that could see them finish in second place but a low points tally would seal their fate. As mentioned before, 16 is the magic number and that is the maximum amount of points Palestine can amass.

As for the Asian Cup, if qualifying ended today Palestine would be one of the four best fourth place teams. That simply means they would avoid playing a playoff to get into the stand alone Asian Cup qualifying tournament.

What's Next: Palestine travel to Tashkent to face Uzbekistan on Tuesday, November 19th.