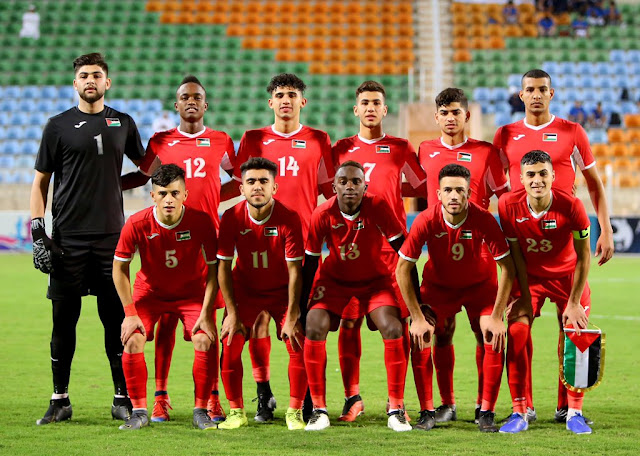 After a  horrible week for Palestine's senior team- one that all but ended their  2022 World Cup hopes- a new generation gave hope to a frustrated a beleaguered fan base.

The U19 team were due to play their qualifying games in Iraq earlier this month but due to protests that have engulfed the country.

That delay might have earned the team added time to gel but what is obvious is that the flashes of promise shown earlier this year are coming to fruition.

Many of the players in this squad took part in the U18 WAFF Championship that Palestine hosted. Palestine managed two draws and two losses over the course of that tournament but more importantly it unearthed more than a few stars.

Anas El-Khatib was one of those stars and he was the hero on Friday night against the hosts of Group A- Oman. A cagey game needed a moment of brilliance and Anas El-Khatib stepped up to provide it


That narrow win was followed by yesterday's rout of Pakistan to give Palestine control over the group and their qualification hopes to next year's U19 Championship in Uzbekistan.

Palestine also had a bit of luck go their way yesterday as Group A favourites Iraq- winners of the tournament on five previous occasions- were held to a draw by Kuwait.

A total of four points from their remaining games against Iraq and Kuwait would guarantee passage to the finals next year. Three points could also be good enough to finish as one of the best runners-up, provided Palestine finish with a goal difference of +3 or better (excluding the result from the last place team of the group.)

Al-Fida'i are the only team in the group to have never featured at the finals of the U19 AFC Championship. Palestine are one of only 8 teams to have never qualified for the finals alongside Bhutan, Guam, Macau, Mongolia, Myanmar, Timor Leste, and Turkmenistan.

The closest Palestine came to qualifying was when they hosted their group in 2016. Wins against India and Afghanistan were followed by a 5-0 defeat by UAE. Two goals in injury time proved to be the difference in the ranking of best runners-up.

Palestine face Iraq on Thursday before wrapping up qualifying on Saturday against Kuwait.