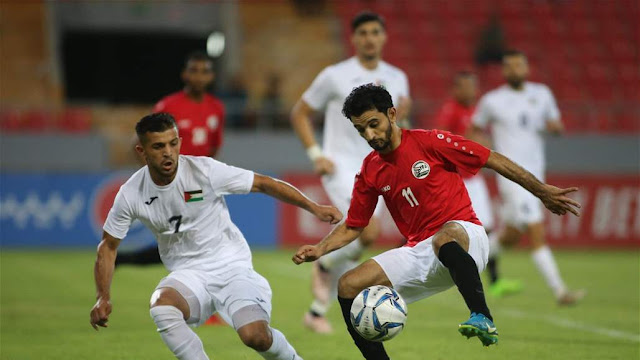 
No Margin for Error

As I wrote last month, if Palestine are to have any hope of advancing to the Third Round of World Cup qualifying they need to first take care of business. That means beating the teams they should beat. Al-Fida'i are in a weird place thanks to their performances over the first three games. They beat Uzbekistan for the first time ever- only to follow it up with a loss against Singapore. They then faced off against Saudi Arabia at home as an underdog but completely dominated the game in terms of chances created- and wasted.

All in all, Palestine have four points but all those points were taken off the top two teams in the group. They will need to find a way to pull off at least one more upset but first they must collect maximum points off Yemen and Singapore. That challenge starts on Thursday with the Yemenis looking to avoid defeat for the third time in four qualifying matches.

There should be very few surprises for Noureddine Ould Ali and his coaching staff as Palestine and Yemen met a mere three and a half months ago in the WAFF Championship. Yemen's starting lineup in their last World Cup qualifier featured seven players that started their 1-0 loss to Palestine.

Palestine on the other hand will be boosted by the presence of Nazmi Albadawi, Mahmoud Wadi, Yashir Islame, Saleh Chihadeh, Jonathan Cantillana and Musab Al-Battat.  The presence of top quality attacking players should help Palestine ease to victory but Yemen have proven a stubborn and resilient opponent.

Yemen are particularly adept at absorbing pressure and capitalising on set piece opportunities. Indeed, the last time the two sides met- Yemen could have opened the scoring from an early corner kick opportunity. After Palestine spurned many a chance, Yemen nearly equalised off a free kick that was parried away by Rami Hamadi.

Since the sides last met, Yemen has become more adept at taking their chances. They scored in a 1-1 draw against Syria, and then followed that up by beating Lebanon 2-1, before succumbing to a 2-1 loss to Iraq to close out what had been a positive WAFF Championship campaign.

Until a disastrous 5-0 loss to Uzbekistan last month, Yemen had done the improbable in holding Singapore and Saudi Arabia to a pair of 2-2 draws.

So while Palestine will be counting on collecting three points in this game; they must be wary of the threat Yemen poses. 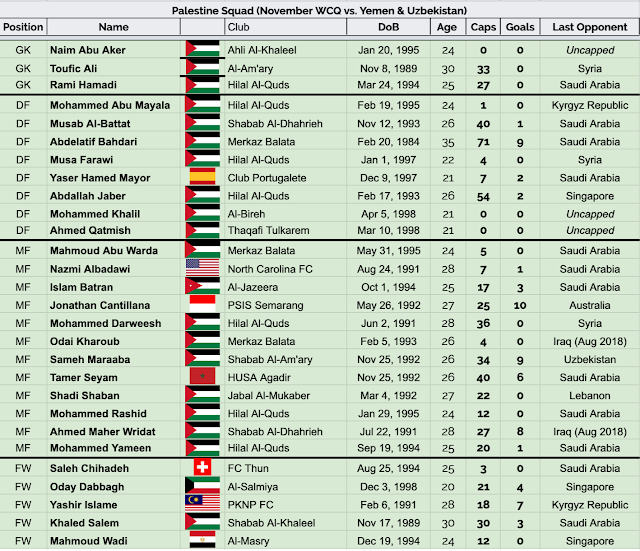 Rotations will be key

From a logistical standpoint, this is the toughest part of Palestine's schedule- which will involve a minimum of five flights for most the members of the team. There are a number of considerations that must be made in any starting lineup fielded against Yemen.

First and foremost, there is a more difficult match awaiting Palestine a mere five days later and it might be worth resting some players with that in mind.

First and foremost, Oday Dabbagh is just returning from injury and anything more than a cameo appearance in this game might be unwise. Mahmoud Abu Warda was great in limited minutes against Saudi Arabia and should get a chance to state his case. Islam Batran should be in line for another start with Tamer Seyam suspended. These changes could give Palestine a chance to be fresher for the match in Tashkent on Tuesday.

Secondly, Abdelatif Bahdari is 35 years old. While he still can contribute he simply cannot be counted on to play twice in five days with two economy class flights sandwiched in between. This might be the time to hand Mohammed Abu Mayala his second cap, especially since the defense won't be too hard pressed in a game where Palestine should have at least 65% possession.

Finally, missed chances have dogged Palestine in the last two matches and whomever starts for Palestine has to put an end to this curse. It might even be time to experiment with playing two forwards. Whatever the tactic, Palestine needs to be clinical- goal difference could prove crucial and as generous as Yemen might prove to be, Uzbekistan will be a far more difficult task come next week.

Noureddine Ould Ali has called up 28 players to the squad and he will need to use the depth of that roster. As it stands, the only changes to the starting lineup have been ones that dictated by injury or suspension. It is imperative that changes made will not only keep key players fresh for Uzbekistan but also ensure no drop-off against Yemen.