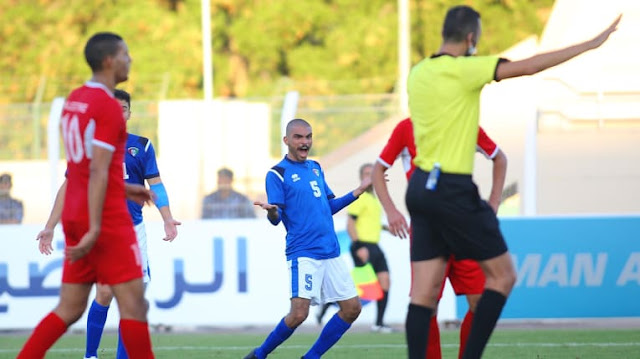 Palestine's U19 team crashed out of qualifying for the U19 AFC Championship and the 2021 U20 World Cup following a 3-3 draw against Kuwait on Saturday.

Much like the game two days earlier there was no shortage of bad refereeing decisions.

With Iraq drawing against Oman, a simple win would have been enough to deliver qualification for the U19 Asian finals in Uzbekistan next year.


Palestine led at three different points of the game. First taking the lead through Ribal Dahamshi and then going up 2-0 thanks to a Khaled Al-Nabrisi strike.

Kuwait scored before the end of the first half and managed to equalise in the 65th minute only for the Palestinians to surge into the lead again through Al-Nabrisi's fourth strike of the tournament.

A spectacular free kick allowed Kuwait in the 86th minute meant the two teams were forced to share the spoils in one of the most competitive qualifying groups of the tournament.

In between the flurry of goals in the 3-3 barn burner there were a series of refereeing decisions that didn't go Palestine's way. Palestine had a perfectly good goal taken off the board due to a botched offsides call that would have put them 2-0 up. Three minutes later Al-Fida'i did take a two goal lead only for controversy to strike again.

The first Kuwaiti goal saw the ball handled by a Kuwaiti player in the box before putting it in the back of the net.

Kuwait's late equaliser from a free kick had shades of Palestine's uncounted goal against Iraq in the first game. The ball hit the crossbar and bounced behind the line before Mohammed Jouda collected it. The refereeing crew correctly awarded the goal to Kuwait- which will only add to Palestine's frustrations.

Despite the early exit, Palestine's U19 can be proud of what they accomplished during this qualifying tournament and several players seem more than ready to step up to the Olympic team. Ribal Dahamshi and Khaled Nabrisi stood out with four goals apiece in a side that attacked relentlessly throughout the tournament.