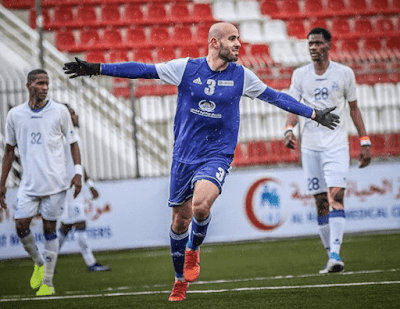 Hilal Al-Quds are through to the group stages of the AFC Cup for the second consecutive year, marking the fifth time a Palestinian club has made it that far in the Asian continent's Europa League equivalent.

Palestinian side have always faced trouble in hosting many West Asian opponents on their home turf due to the ongoing Israeli occupation- which has resulted in forfeits, adjudicated decisions, and matches on neutral turf. The 2020 edition of the AFC Cup will generate the same questions after Hilal Al-Quds triumphed over Sur Club of Oman 2-0 on aggregate.

The Palestinian champions have been drawn in Group A and will face the holders Al-Ahed, Syrian champions Al-Jaish, and Bahraini side Manama.

Visits of Arab teams to Palestine is often seen as a normalisation of Israeli occupation with many in Palestine and abroad advocating for a complete boycott of such activity.

Jordan is the only state in the region with formal diplomatic relations with Israel but Palestine has played hosts to national or club teams from Oman, Iraq, Bahrain, Qatar, UAE, and most recently, Saudi Arabia.

Teams from Lebanon and Syria have yet to visit Palestine and given the current political status quo that looks unlikely to change anytime soon.

Palestinian teams were drawn with Lebanese or Syrian clubs in the 2016 and 2019 editions of the tournament.

In 2016, the AFC had no plan in place and a crisis ensued that played a big part in the group stage eliminations of Shabab Al-Dhahrieh and Ahli Al-Khaleel. The scenario repeated itself last year, with the governing body waiting until the 11th hour to mandate Hilal Al-Quds play Al-Jaish and Nejmeh on neutral territory.

This time around, the AFC has mandated that all clubs involved select a neutral location to host their games. This has been the modus operandi for Syrian clubs who have bot been able to host matches due to the ongoing civil war. As a result, Hilal Al-Quds will only play host to Bahraini League runners-up Manama and will most likely host their Syrian and Lebanese counterparts in the Jordanian capital of Amman.

The Jerusalem based club kicks off its Group stage campaign on February 10th and will host its only home game on March 9th.
AFC Cup