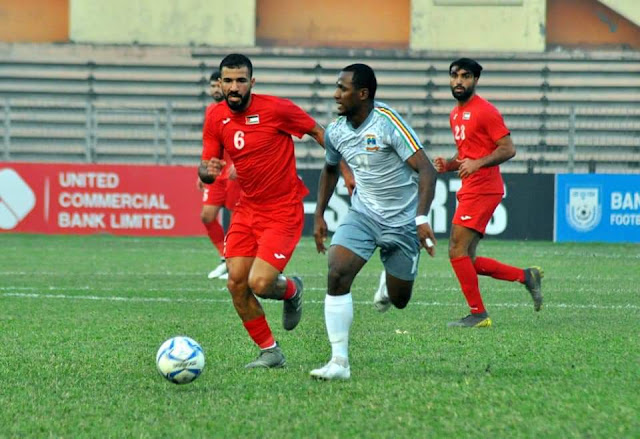 
Recap: After sleep walking through the group stages Al-Fida'i were braced for their first real test of the tournament. In seeking to defend their title a makeshift defence managed to maintain Palestine's clean sheet streak. In the 2018 tournament, Palestine registered results of 2-0, 1-0, 2-0, and 0-0 against Tajikistan, Nepal and Bangladesh. A pair of 2-0 wins over Bangladesh and Sri Lanka continued the trend to start the 2020 tournament- papering over some unconvincing performances including a near embarrassment against lowly Sri Lanka.

It was rather ironic that a team that could only manage a meagre two draws and three goals in their last 12 games coming into the Gold Cup. The islanders were still looking for a win- which would have been their first since 2016- coming into this match against the holders Palestine. The Pirates only advanced to the semifinal stage after a 2-2 draw against Mauritius- who had lost to Burundi by three goals as opposed to Seychelles two.

Palestine did start off well and did put together a lineup that featured its best performers over the past two games. The extra three days' rest also helped Palestine dominate possession during the opening 20 minutes. That said, despite the improved play there was a struggle to create chances and that led to get very few serious attempts at goal.

That trend continued in the second half with Seychelles growing into the game and at one point registering more shots than Palestine.

Seychelles even managed to hold Khaled Salem in check despite one if their centrebacks playing injured for more than an hour. Salem was once again anonymous, lazy, and ineffective yet got the honor of playing a full 90 minutes.

Palestine's breakthrough was a product of luck with Layth Kharoub latching on to Abu Warda's long ball, dribbling forward and delivering a wayward cross that floated above the goalkeeper's head and into the net.


What I liked: Palestine were better to start the match but the insistence on long balls is baffling. A win is a win and a team like Palestine can never take that for granted. A clean sheet is also nice That said Seychelles are ranked 200th in the world and looked perfectly comfortable for large periods of the game.

What I didn't like: A long ball tactic might work with an effective number 9 or when playing against stronger opposition likely to cede ground in defence. There isn't a single team in this tournament that would be susceptible to counterattacks. It doesn't take a genius to figure that out. The players executed a flawed strategy but it is one that is hard to watch. While it's great to see the likes of Iraqi, Darwish, and even Layth Kharoub get a chance with the national team it was nearly negated by having to see Khaled Salem start ahead of Reebal Dahamsheh- who actually has a future with this team. Khaled Salem was kept in check by a guy who could barely run. Should he start the final it would be a huge miscarriage of justice.

What's Next: Palestine face the winner of Burundi v Bangladesh in the final on Saturday.
2020 Friendlies